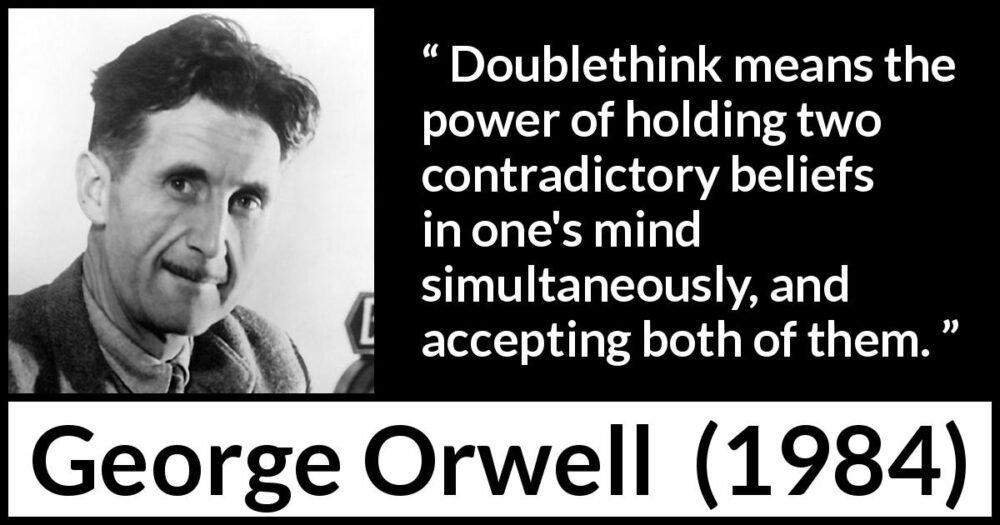 People Long-Drowning in a Sea of Propaganda Are Slowly Awakening

According to this entry over at Wikipedia on ‘cognitive dissonance’, in the field of psychology, ‘cognitive dissonance’ is the perception of contradictory information… two (or more) actions or ideas that are not consistent with each other… triggering discomfort within the individual… who then tries to find a way to resolve the contradictory information which is a battle between their original beliefs and new information learned that contradicts those beliefs. Often causing great strife and psychological discomfort within the individual who is experiencing ‘cognitive dissonance’, a perfect example of that happening right now across America is seen in two different stories being heavily pushed by the mainstream media, starting with this story over at the Baltimore Sun titled “Maryland, nation keep watch for omicron, but the message is the same: Get vaccinated and boosted”.

Coming out the same day as this story over at the Financial Times titled “Moderna chief predicts existing jjabs will struggle with Omicron – Stéphane Bancel foresees ‘material drop’ in current jabs’ effectiveness, sending stocks and oil prices lower” and this story over at the Washington Post titled “Existing jjabs might not be effective against omicron variant right away,” Moderna CEO says, what are Americans supposed to think when they’re being heavily pushed to ‘get jaxxed’ and ‘get boosted’ in one story when in another viral story, they’re being told these vaxxes likely won’t work against Omicron?

Giving us up here on our mountaintop another reason to avoid all these ‘vaxxes’ and ‘boosters’ as if they ARE ‘the plague’, as ANP commenter ‘Chrism12743′ had mentioned in a very nice comment that was part of a series of comments on this November 29th ANP story: “People are drowning in a sea of misinformation. Keep publishing, Americans are emerging from their slumber!!!”

So cognitive dissonance is now striking Americans who haven’t been paying attention, hard, as they’re bombarded with two different streams of information that are highly conflicting, and many of those same people already having their belief system challenged with what they’re seeing as the failure of the vaxxes and the utter failure of Joe Biden, who many of them voted for, happening at the same time.

‘Dilbert’ cartoon creator Scott Adams heavily bombards those who haven’t been paying attention to the ‘vax’ and the ‘virus’ with ‘cognitive dissonance’ in the 1st video at the bottom of this story. According to this story over at Psycom.net, the effects that ‘cognitive dissonance‘ might have on a person will vary, though as it’s happening in the moment, it can cause ‘discomfort, stress, and anxiety’ in the individual feeling it, with the actual ‘degree’ of that stress and discomfort depending on how much disparity there is between the conflicting beliefs, how much the beliefs mean to that person, as well as with how well the person copes with self-contradiction.

With some of the signs someone might be experiencing cognitive dissonance including ‘general discomfort that has no obvious or clear source’, confusion, feeling conflicted over a disputed subject matter, people calling you a hypocrite or even being aware of conflicting views and/or desires but not knowing how to deal with those conflicting emotions/feelings, most of us experience ‘cognitive dissonance’ at one time or another, although not all of us to the same degree.

With another cause of ‘cognitive dissonance‘ in America being ‘President Brandon’ claiming back in July that ‘you’re not going to get COVID if you have these vaccinations’ coming soon before the bottom dropped off and many of the fully jaxxed got COVID, with some dying and many passing it on to others, other Americans are wondering what to think now when ‘Brandon’ tells them the stores will be fully stocked and the shelves full as we approach Christmas, only to then go to their local supermarkets and see empty shelves galore.

So with one of the best ways to deal with ‘cognitive dissonance’ being to keep a totally open mind, ready for your beliefs to be challenged and remaining mentally, physically and emotionally ‘flexible’ to deal with any such challenge that comes one’s way, doing so is by no means saying one should change one’s own beliefs every time they are challenged but taking in and adapting to new information.

Such as the people who once though ‘the vax is the answer’ seeing now that they’re getting bombarded with numerous sources of information that are totally contradictory to each other. So with the mainstream media in 2021, and having gone on for many years now, being the primary source of ‘disinformation‘ in America, some have have compared our current MSM with the propaganda machines of totalitarian regimes of the past, ‘cognitive dissonance‘ also borders upon ‘Orwellian Doublethink‘, a process of indoctrination whereby the subject is expected to simultaneously accept two mutually contradictory beliefs as correct, often in contravention to one’s own memories or sense of reality. Doublethink is related to, but differs from, hypocrisy.

George Orwell coined the term doublethink (as part of the fictional language of Newspeak) in his 1949 dystopian novel Nineteen Eighty-Four. In the novel, its origins within the citizenry is unclear; while it could be partly a product of Big Brother’s formal brainwashing programs, the novel explicitly shows people learning doublethink and Newspeak due to peer pressure and a desire to “fit in,” or gain status within the Party — to be seen as a loyal Party Member.

In the novel, for someone to even recognize—let alone mention—any contradiction within the context of the Party line is akin to blasphemy, and could subject that person to disciplinary action and the instant social disapproval of fellow Party Members.

Like many aspects of the dystopian societies reflected in Orwell’s writings, Orwell considered doublethink to be a feature of Soviet-style totalitarianism.

Sound at all familiar in 2021? So that’s what the globalists now pushing ‘the shots’ as ‘the answer’ want Americans and the world to think like; accepting their claims that everyone must ‘get jaxxed’ for us to ‘get out of this pandemic’ while the news is spilled all over that according to one of the heads of the big pharma mafia, the ‘shot’ won’t get us out of this mess… but we’re still supposed to believe that the shot will get us out of this mess. Yeah. Ok. Once again, from this Wikipedia entry.

According to Nineteen Eighty-Four by George Orwell, doublethink is:

To know and not to know, to be conscious of complete truthfulness while telling carefully constructed lies, to hold simultaneously two opinions which cancelled out, knowing them to be contradictory and believing in both of them, to use logic against logic, to repudiate morality while laying claim to it, to believe that democracy was impossible and that the Party was the guardian of democracy, to forget whatever it was necessary to forget, then to draw it back into memory again at the moment when it was needed, and then promptly to forget it again, and above all, to apply the same process to the process itself — that was the ultimate subtlety: consciously to induce unconsciousness, and then, once again, to become unconscious of the act of hypnosis you had just performed. Even to understand the word — doublethink — involved the use of doublethink.

Orwell explains that the Party could not protect its near-absolute power without degrading its people with constant propaganda. Yet knowledge of this brutal deception, even within the Inner Party itself, could lead to the implosion of the State. Although Nineteen Eighty-Four is most famous for the Party’s pervasive surveillance of everyday life, this control means that the population of Oceania — all of it and including the ruling elite, but in practice largely excluding the proles — could be controlled and manipulated merely through the alteration of everyday thought and language. Newspeak is the method for controlling thought through language; doublethink is the method of directly controlling thought.

Newspeak incorporates doublethink, as it contains many words that create assumed associations between contradictory meanings, especially true of fundamentally important words such as good and evil, right and wrong, truth and falsehood, and justice and injustice.

The demand for doublethink was especially difficult on employees of the Records Department in the Ministry of Truth. The department’s responsibility was to falsify historic records, even recent ones, by means of rewrite and deletion, all so that the Party could maintain the illusion that everything it had ever said and done was perfect and consistent. Yet, despite their direct role in this systematic deception, these same workers were still expected to believe the most recently created version of history, or face severe penalty if they failed.

So with never a better time than now to keep on seeking and pushing out ‘the truth’ as ‘the masses’ are slowly awakening with ‘cognitive dissonance’ about COVID and ‘the vaxxes’ throwing many into a tailspin in 2021, we ourselves will keep ‘taking the red pill’ to see just how deep this rabbit hole goes.

Each of the videos below take a look at America’s still unfolding nightmare with the 1st video featuring Episode 1575 of ‘Real Coffee with Scott Adams’ in a video titled “Today I Will Trigger Some of You Into Cognitive Dissonance. Sorry.”

Bringing up much of the unfolding madness surrounding ‘Omicron‘ and how much of what we’re being told is totally contradictory to things we’ve already learned, we again come back to ‘1984‘ and George Orwell explaining that the Party could not protect its near-absolute power without degrading its people with constant propaganda. Yet knowledge of this brutal deception, even within the Inner Party itself, could lead to the implosion of the State. Might we soon witness such a scenario in America?

And as the Health Ranger Reports warns in the 2nd/final video below titled “Covid ‘Nu’ (Omicron) variant a COVER STORY for accelerating wave of jjab deaths,” the omicron “variant” media hysteria is pure fiction:

It’s nothing but a 1984-style Orwellian psychological terrorism operation that has been engineered to keep the populations of the world enslaved and obedient while terrorist governments carry out their global depopulation / genocide programs. ‘1984‘ in 2022? All eyes should be open and all hands on deck and Americans prepared for anything and everything for the next several months and into the Spring and Summer of 2022.