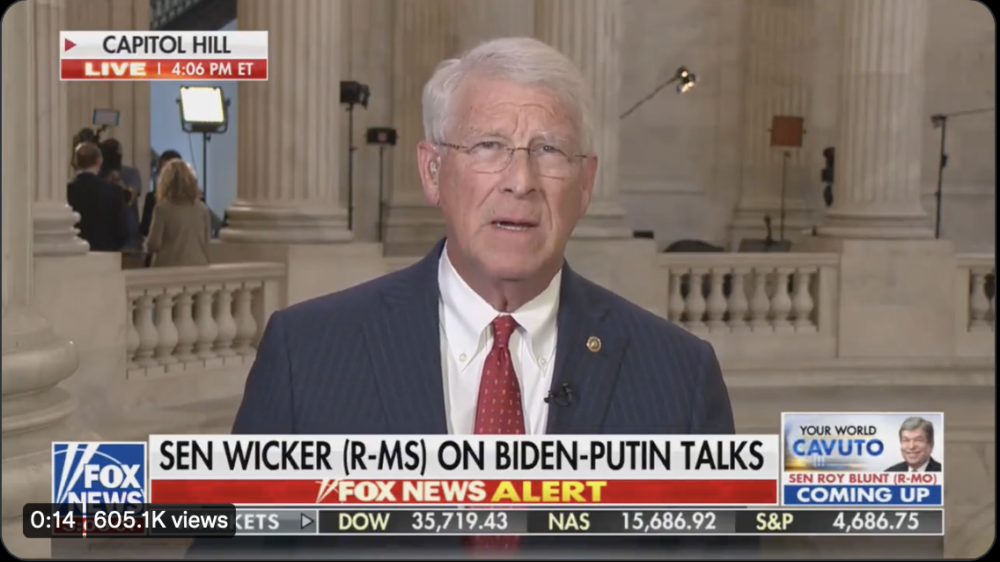 Psychopathic US Leaders Try to Provoke NUCLEAR WAR with Russia

US establishment leaders — including RINOs — are trying to provoke Russia into a full-scale war over Ukraine in order to provide sufficient chaos as a cover for the planned “global reset” debt bomb implosion. They also need a war in order to justify medical martial law, gun confiscation and supply chain failures while suspending the 2022 midterm elections and keeping the Biden puppetmasters in power for as long as possible. 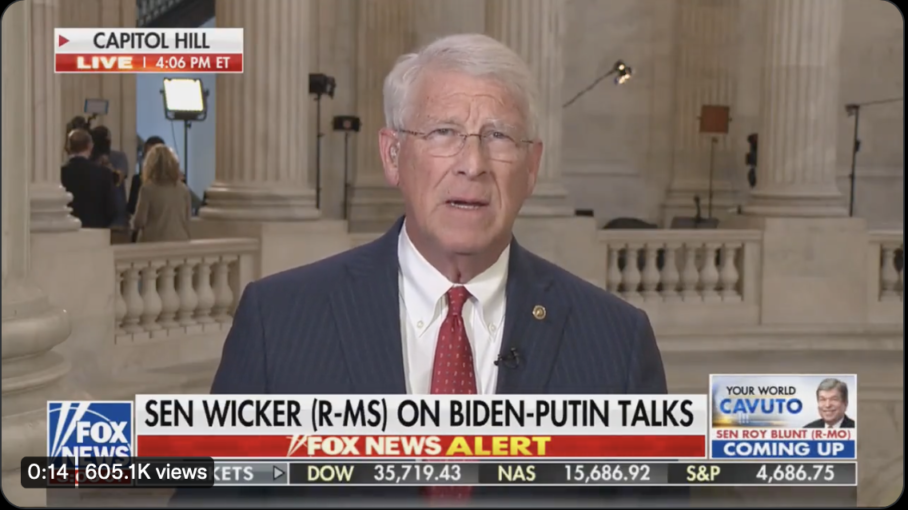 Enter US Senator Roger Wicker (R-MS) who, on Fox News with Neil Cavuto, implied that the US military could launch a surprise nuclear attack on Russia.

“I would not rule out American troops on the ground,” Wicker told Cavuto, adding that we also shouldn’t “rule out first use nuclear action” against Russia.

The phrase “first use” means a surprise attack. You can watch Sen. Wicker invoke this insanity in the following clip:

On Fox News, Sen. Roger Wicker (R-MS) floats the idea of bombing Russian military assets — and says he wouldn't even rule out a nuclear strike pic.twitter.com/I6SatMy6hi

This sort of talk is beyond stupid; it’s extremely dangerous because it invites Russia to attack us first if Putin becomes convinced that the US would launch a surprise attack of its own.

This is standard game theory stuff, and we can assure you that Putin has a significantly higher IQ than anyone making these decisions in the USA. When it comes to strategy, Putin is a genius. By comparison, Joe Biden is a dementia patient who craps himself.

Russia would devastate US and NATO forces in Europe

As I point out in today’s very important Situation Update podcast (below), Russia would mop the floor with US and NATO forces if a war were to break out over Ukraine.

Why? For starters, because Pentagon leaders are all compromised communists, traitors and sellouts. They deliberately want to cause America to fail.

Secondly, they’ve turned the US military into a woketard social experiment that emphasis transgenderism and gayness over combat effectiveness.

Russia trains actual men to fight like warriors, while America encourages former men to be transformed into sissified soy boys who wear high heels and women’s panties while swallowing chemical castration drugs in the name of “gender equality.”

Watch below the recruitment ads: China vs. Russia vs. USA

Third, Russia is vastly ahead of the US in terms of weapons technology, including the development of hypersonic missiles. Russia already has hypersonic missiles in full deployment, while the US military lags years behind and will probably never get them to work, since the entire military industrial complex has also gone full woketard.

These missiles are game-changers in any theater of war because there are no defenses against them. They move so fast that radar can’t track them due to the laws of physics as explained below.

Hypersonic weapons such as Russia’s 3M22 Zircon fly so fast and low — at speeds of up to Mach 6 and at a low atmospheric-ballistic trajectory — that they can penetrate traditional anti-missile defense systems.

The missile flies with an advanced fuel that the Russians say gives it a range of up to 1,000 kilometers. And it’s so fast that the air pressure in front of the weapon forms a plasma cloud as it moves, absorbing radio waves and making it practically invisible to active radar systems.

As part of “the completion of tests” of Russia’s hypersonic missile weapons, the Admiral Gorshkov warship launched a Zircon missile at a target in the Barents Sea at a range of 400 kilometers, the defense ministry said.

“The target was hit,” the ministry said, describing the test as successful.

At 400 kilometers — which isn’t even the full range of the missile — these hypersonic missiles can destroy any US surface naval ship that attempts to harass Russian forces near Ukraine.

Even more astonishing is the fact that Russia appears to have nuclear-powered cruise missiles, which would put such weapons into a class all their own, far outside the capabilities of anything that’s even on the drawing board in the US military.

Russia has boasted of developing several weapons that circumvent existing defense systems, including the Sarmat intercontinental missiles and Burevestnik cruise missiles. Western experts have linked a deadly blast at a test site in northern Russia in 2019 — which caused a sharp spike in local radiation levels — to the Burevestnik nuclear-powered cruise missile.

If the U.S. even dared to attack Russia, most of the key US military assets used in such an attack would likely be destroyed in less than 15 minutes, in my assessment.

Shockingly, this appears to be the goal of the treasonous Pentagon which also oversaw the deliberately disastrous withdrawal from Afghanistan that left behind over ten billion dollars worth of military equipment which immediately fell into the hands of the Taliban.

The Pentagon, it seems, is actually pursuing a strategy of [giving away] as much US military equipment as possible [to our enemies] while mass jjabing US troops with deadly mRNA covid “jjabs” that are designed to kill as many as possible.

The Pentagon is literally running a treasonous, murderous campaign from inside the USA to destroy the USA. Striking up a war with Russia would help achieve that goal through what I call, “Russia-assisted suicide,” which simply means US military leaders invoking a Russian response to destroy more US military equipment (naval vessels, land forces, aircraft, etc.) in order to weaken the United States.

The real long-term goal is the surrender of the USA to China. This is all being meticulously put into place with mandatory jjabs, economic collapse, domestic culture wars, anti-America media propaganda and Big Tech’s open collusion with communist China.

The upshot of all this is that treasonous US bureaucrats, senators and Joe Biden cabinet members have already made the decision to plunge the USA into war with Russia and China. In order to disrupt the 2022 mid-term elections, this war will need to be launched no later than April of 2022, and it will likely be combined with a cyber attack false flag operation targeting US infrastructure (the power grid in particular).

This means the power grid will be taken down, cutting off key communications such as the internet and mobile phones. At that time, should this occur, the only functioning comms will be local radios and satellite phones.

Sponsor: I feel compelled to mention that the Satellite Phone Store at SAT123.comprovides sat phones that will continue to function during these emergencies. They are a sponsor of my Situation Update podcast, below. These phones use the same satellites as the military itself.

Under this scenario, the dollar would of course suffer a catastrophic collapse, all timed as part of the global financial reset where “you will own nothing and be happy.” (Or be dead, more likely.) Similarly, an engineered collapse of the crypto ecosystem looks to be shaping up in what we’re now calling the “crypto reset” scenario.

It almost goes without saying, but food supplies, medicine, ammunition and other critical gear will of course be wiped out and nearly impossible to find. Those who fail to prepare will be quickly starved into submission or death. As we’ve also covered, all the top global food corporations have already agreed to the weaponization of the food system against humanity. Meanwhile, the genocidal jjab depopulation scamdemic continues its march toward a global mass die-off.

Get more details in today’s bombshell Situation Update podcast, which also covers crypto, the Smollett hate crime hoax and much more. Hint: This podcast also reveals how anyone can become a “crypto billionaire” in literally five minutes. No joke. Do the math…

The War with Russia segment begins at around 38 minutes.