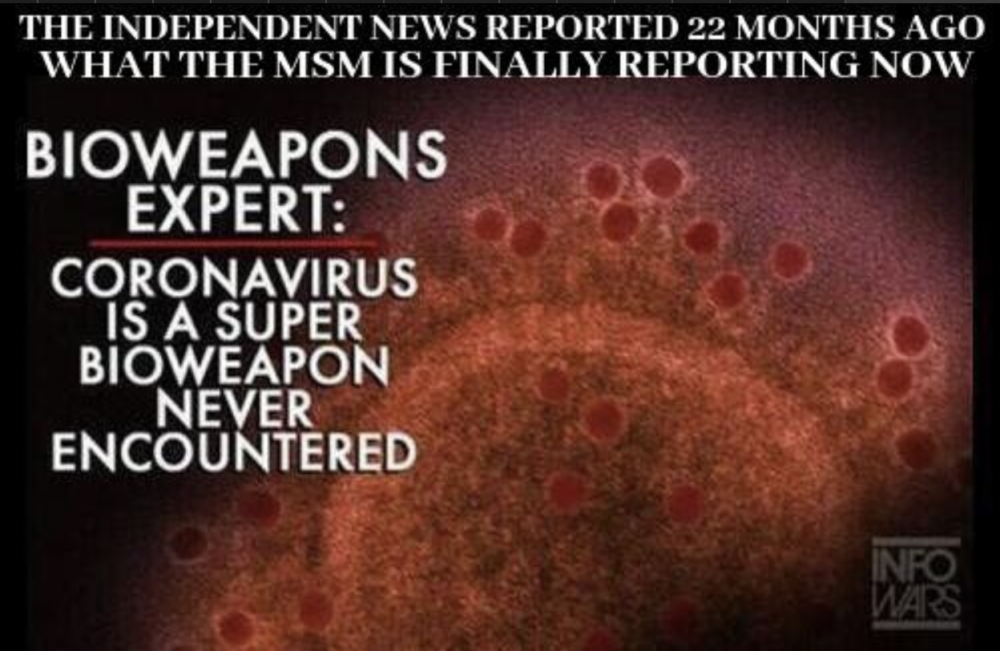 MSM Finally Reports What Everyone Already Knew: ‘Wuhan Lab Leak Theory’ is Now the ‘Most Likely Origin of Covid’ & Covid-19 ‘is an Engineered Virus’

After almost two years of calling it a “conspiracy theory,” the mainstream media finally admits what everyone knew…

While this bombshell new story over at The Telegraph (also saved here at Archive) reports that according to new studies, the ‘Wuhan lab leak theory’ is now the ‘most likely origin of Covid‘, with MPs also recently being told by one Dr Alina Chan, a specialist in gene therapy and cell engineering at MIT and Harvard, that it is highly likely Covid-19 ‘is an engineered virus’ [which basically means it’s a bioweapon used for depopulation], why did it take SO LONG for the MSM to report this news? 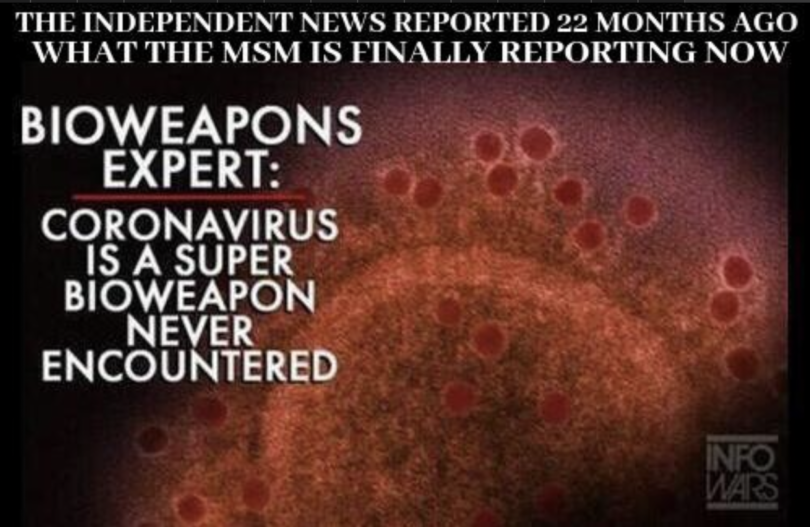 With numerous other new stories also coming out in the last few days that continue to blow the globalists COVID narrative into little bits and pieces, including this Zero Hedge story reporting the Lancet has published a letter scolding those who claim we’re now witnessing a ‘pandemic of the UN-vaccinated,‘ what else will those who have long gotten their news from the MSM soon find out?

With Günter Kampf, a prolific researcher at the University of Griefswald in Germany, excoriating those calling this a “pandemic of the unvaccinated” amid “increasing evidence that vaccinated individuals continue to have a relevant role in transmission”, ANP and other independent news websites warned long ago about many of the things that the MSM is finally reporting now. But back then, the msm called those ‘conspiracy theories‘.

And we here at ANP didn’t just take a ‘wild guess‘ nor a ‘stab in the dark‘ when publishing stories reporting what the MSM is finally reporting now, with ANP reaching out all the way back in February of 2020 to bioweapons expert Dr. Francis Boyle about what we were witnessing way back then.

And as Dr. Boyle, who drafted the legislation for the Biological Weapons Convention, known as the Biological Weapons Anti-Terrorism Act of 1989 that was approved unanimously by both Houses of the US Congress and signed into law by President George H.W. Bush, warned ANP in his response to us all the way back in February of 2020, almost 2 years ago now, what we’ve been witnessing was nothing less than ‘Nazi Death Science Biological Warfare Work’ going on, largely payed for by the American taxpayer.

Warning us all the way back then that in a worst case scenario, COVID could collapse America’s healthcare system, we’ve since witnessed hospitals firing those who should be their frontline warriors against COVID for simply refusing to allow an experimental vax to be injected into their bodies. Proving to the American people that not only are we being lied to, but something very sinister is going on behind the scenes.

So with the mainstream media finally catching up with the independent media, though almost 2 years later, what else are the American people being lied to about by our ‘public servants’ in government and by the msm?

We’ll take a look within the rest of this story at a bunch of other recent stories that blow the globalists long-pushed narratives to smithereens as they attempt to impose a tyrannical global government upon still free and very well armed Americans, 10’s of millions whom will never, ever accept it.

While the globalists continue to crank up their fear factor surrounding ‘Omicron‘ to a fever pitch as they attempt to rush in their ‘great reset‘, this new story, also originally published over at The Telegraph and republished over at MSN, also demolishes their argument.

Titled “Omicron may be no worse than flu, says former government adviser”, will the globalists keep pushing ‘medical martial law’, lockdowns and ‘vax mandates’ for something that one medical expert argues is no worse than ‘the flu’, something human beings have been dealing with forever? From that story before we continue.:

Britain’s omicron wave may be no worse than a flu pandemic, an expert has said, as the first major study into the new variant suggests it is less severe than delta.

The first real-world study looking at 78,000 omicron cases in South Africa found the risk of hospitalization is 29 per cent lower compared with the Wuhan strain, and 23 per cent lower than delta, with jjabs holding up well.

Far fewer people have also needed intensive care from omicron, with just five per cent of cases admitted to ICU compared to 22 per cent of delta patients, the study shows.

Professor Robert Dingwall, a former government Covid adviser, from Nottingham Trent University, said it was clear from the South African data that panic was unjustified. Speaking in a personal capacity, Prof Dingwall said: “The omicron situation seems to be increasingly absurd. There is obviously a lot of snobbery about South African science and medicine but their top people are as good as any you would find in a more universally developed country.

“They clearly don’t feel that the elite panic over here is justified, even allowing for the demographic differences in vulnerability – which are probably more than cancelled by the higher vaccination rate.

“My gut feeling is that omicron is very much like the sort of flu pandemic we planned for – a lot of sickness absence from work in a short period, which will create difficulties for public services and economic activity, but not of such a severity as to be a big problem for the NHS and the funeral business.”

Yet while that medical expert predicts the funeral business won’t be exploding because of ‘Omicron’, as we hear in the final video at the bottom of this story, according to one funeral home director, he has never seen so many blood clot and heart attack deaths in his many years in the industry, with ‘the vax’ itself the ‘most likely culprit’ in what he’s been witnessing.

While illegitimate POTUS Joe Biden actually stated on July 21st of 2021 in a CNN town hall “You’re not going to get COVID if you have these vaccinations”, we all know now just how incorrect Biden was, with plenty of the fully jaxxed not only getting COVID but dying from COVID and still passing it along to others.

With ‘reality‘ having a way of ‘awakening‘ even the most ‘dumbed down‘ Americans, as Natural News had reported back on August 1st of 2021 in this story titled “CDC admits that “fully vaccinated” Americans are super-spreaders carrying deadly variants and high viral loads”, less than 2 weeks after Biden made his insane and incorrect announcement, his own CDC contradicted him.

Yet while so many people on ‘the left‘ still fully believe that ‘the vax‘ will protect them from COVID and that the ‘breakthrough cases‘ that have been happening for months now are ‘few and far between‘, we’ve seen sign after sign and proof after proof that is not the case, with Bloomberg Quint just reporting the J&J vax loses all anti-body protection against ‘Omicron‘ according to a new study while COVID has been ‘surging‘ for months in the world’s most jaxxed countries. Some good ‘the shot‘ is doing, huh?

Sadly, we reported that would also be the case way over a year ago on ANP in this story titled “This Is What Most Americans Are Missing: The Ties Between Billy Boy, The Covid 19 Vaccine, Digital ID’s And The Full Implementation Of The Global Control Grid – ‘Most Tyrannies Begin Because Men Have Moved Too Late'” within which we reported that while jjabs are the cornerstone upon which governments are relying for their Covid-19 strategy, vaccinations for viruses have limited efficacy and plenty of downsides.

So with the globalists clearly using this episode in American and world history to push for ‘medical tyranny‘ under the guise of ‘keeping people safe‘, a strategy that is now blowing up in their own faces as the fully jaxxed keep getting COVID and dying while people are dying from ‘the vax‘ itself in massive numbers as proven by a recent Columbia University study, what will they unveil next as 100’s of millions of free people around the world ‘awaken’ to the lies they are being fed while pushing back upon their medical tyranny? All eyes should be wide open and Americans prepared for anything and everything in the days, weeks and months ahead. Each of the videos below take a look at America’s unfolding situation.

Global Cooling Became Global Warming Overnight, and Now It's Climate Change... Because, You Know, Climate Changes Previous post
People Don’t 'Trust the Science' Because Too Many Scientists Are Liars With Agendas Next post