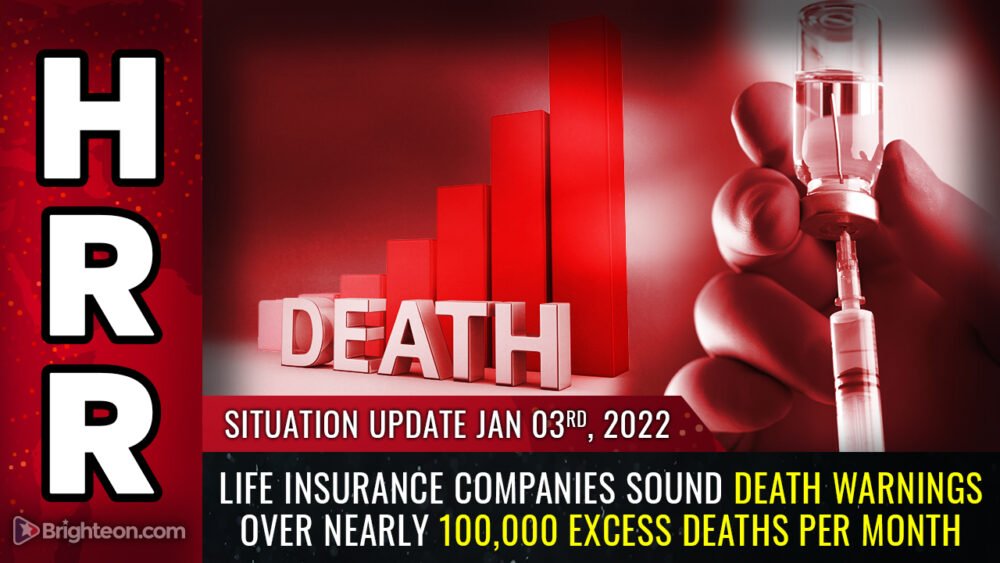 There are nearly 100,000 excess deaths happening per month in the USA right now, according to life insurance companies that are sounding the alarm over what Dr. Robert Malone calls a “mass casualty event” that’s unfolding due to covid injections. 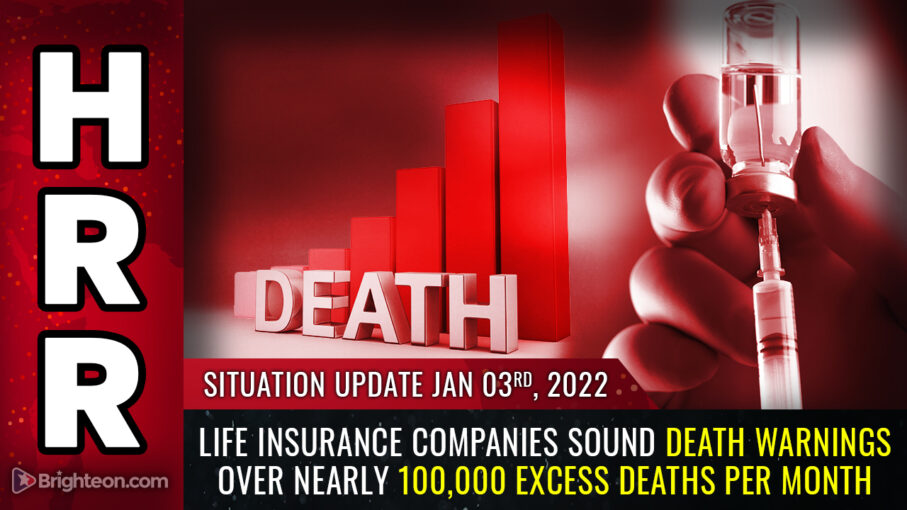 This is a red alert situation unfolding right in front of us. The human race is being slaughtered through the injection of “clot shots” that are deliberately designed to reduce global population through death and infertility.

All the politicians, scientists, regulators and journalists who are in on this are committing genocidal crimes against humanity, and they are even targeting children.

An article published by The Center Square (Indiana) reveals how Scott Davison, CEO of OneAmerica (a life insurance company) is sounding the alarm over a 40% increase in total deaths among Americans aged 18 to 64 (i.e. working-aged Americans):

“We are seeing, right now, the highest death rates we have seen in the history of this business – not just at OneAmerica,” the company’s CEO Scott Davison said during an online news conference this week. “The data is consistent across every player in that business.”

Davison said the increase in deaths represents “huge, huge numbers,” and that’s it’s not elderly people who are dying, but “primarily working-age people 18 to 64” who are the employees of companies that have group life insurance plans through OneAmerica.

“And what we saw just in third quarter, we’re seeing it continue into fourth quarter, is that death rates are up 40% over what they were pre-pandemic,” he said.

So the CEO in his own words. They are mandating jjabs in the workplace and raising premiums in lower vaccinated counties because they are mistakenly guessing here initially. The premiums will change to higher vaccinated areas as time moves on is my guess. He missed the plot. pic.twitter.com/avjFxkn7su

There are several critical points to understand here:

Do the math: Here’s how we get to nearly 100,000 excess deaths per month in America right now

According to IndexMundi.com, there are normally about 7,755 deaths per day in the USA, pre-covid. The 40% increase in mortality now being seen by life insurance companies, if applied across all age groups, would mean an additional 3,100 deaths per day.

Multiply that by 30 days and you get over 93,000 excess deaths per month in the USA.

Remember, this is based on third quarter data from 2020, yet we know that jjabs cause immune system failure to worsen over time. This means fourth quarter data will be even worse, and the Q1 2022 data will likely be worse still. In addition, we have cancer deaths starting to skyrocket due to spike protein interference with chromosomal damage repair mechanisms, which is why I’m predicting we will see over 1 million cancer deaths in calendar 2022, which is roughly a doubling of the usual cancer death statistics.

Given these accelerating factors — failing immunity, accelerated cancer tumor growth and the addition of yet more booster shots — there’s no question that 2022 is going to see an extra one million deaths in the USA, and perhaps many more. (It could be 1.5 million or even 2 million.)

If the booster shots are aggressively pushed and we see Antibody Dependent Enhancement accelerate as common flu strains are circulated, we could be looking at a doubling of the total death rate, going from 7,700 daily deaths to 15,400 deaths per day. This means we would be losing nearly 1.7% of the entire U.S. population in just one year (that’s the sum of normal deaths plus the extrapolation of excess covid jjab deaths).

This is all happening because the covid “jjabs” are really depopulation bioweapons. Dr. Robert Malone has noticed the signals and has sent a new warning to the world in this article:

It is starting to look to me like the largest experiment on human beings in recorded history has failed.  And, if this rather dry report from a senior Indiana life insurance executive holds true, then Reiner Fuellmich’s “Crimes against Humanity” push for convening new Nuremberg trials starts to look a lot less quixotic and a lot more prophetic.

IF this holds true, then the genetic jjabs so aggressively promoted have failed, and the clear federal campaign to prevent early treatment with lifesaving drugs has contributed to a massive, avoidable loss of life.

AT WORST, this report implies that the federal workplace jjab mandates have driven what appear to be a true crime against humanity.  Massive loss of life in (presumably) workers that have been forced to accept a toxic jjab at higher frequency relative to the general population of Indiana.

FURTHERMORE, we have also been living through the most massive, globally coordinated propaganda and censorship campaign in the history of the human race.  All major mass media and the social media technology companies have coordinated to stifle and suppress any discussion of the risks of the genetic jjabs AND/OR alternative early treatments.

This article reads like a dry description of an avoidable mass casualty event caused by a mandated experimental medical procedure. One for which all opportunities for the victims to have become self-informed about the potential risks have been methodically erased from both the internet and public awareness by an international corrupt cabal operating under the flag of the “Trusted News Initiative”. George Orwell must be spinning in his grave.

The upshot of all this is that covid jjabs are creating a “mass casualty event.” Worse yet, it’s all deliberate. All the tyrants and genocidal maniacs pushing these jjabs are carrying out an actual jjab holocaust that will likely kill between 1 to 2 billion people worldwide over the next decade, even if the clot shots are stopped right now.

They are doing it on purpose. Big Tech, Big Pharma, Big Media and Big Government are all conspiring to achieve a planetary-scale ethnic cleansing campaign involving mass suffering and death across human civilization.

You are literally living through a global holocaust disguised as a jjab campaign. The needle is the weapon delivery system, and the weapons are mRNA “payloads.”

Get full details in my hard-hitting Situation Update podcast for today: