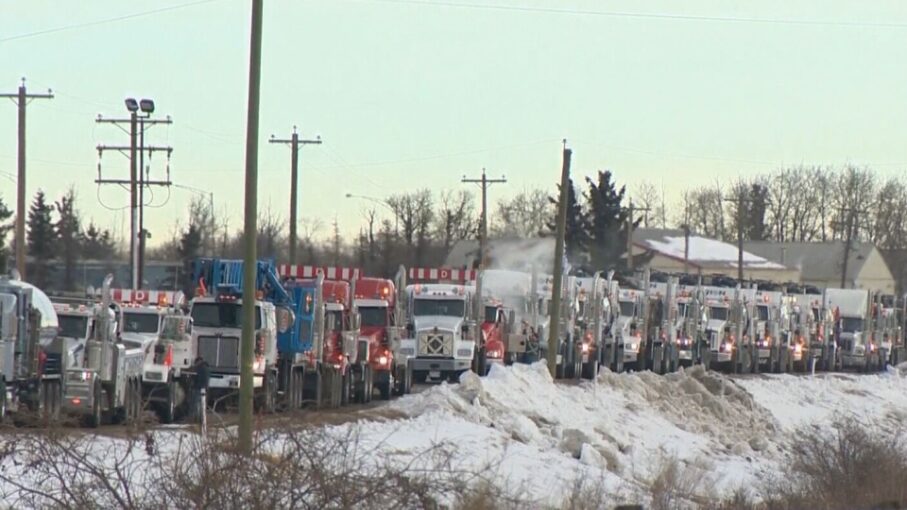 Canadian Truckers Take Back Country from the Great Reset

A convoy of roughly 50,000 truckers and their supporters are piling into Ottawa this weekend to protest Prime Minister Justin Trudeau’s jab mandate.

Trudeau’s mandate orders Canadian truckers to get the injection or face a 14-day quarantine every time they cross the US border.

The Freedom Convoy and hundreds of thousands of supporters have surrounded Parliament Hill on Saturday despite below-freezing temps to demand Trudeau lift all draconian COVID restrictions.

The live show feed will be included here, so bookmark this page for updates and tune in to these live streams documenting the Canadian Freedom Convoy in real time.

The historic protest was organized by Canada Unity, and the U.S. anti-mandate group Freedom Fighter Nation has also joined in solidarity.

Dozens of vehicles have already blocked the roads in front of Canada’s Parliament buildings as more protesters continue to stream into the city.

turning red‘r by the minute as the #ConvoyForFreedom2022 descends on ottawa <3 trucks will not move until freedom from mandates is achieved <3 THANK YOU TRUCKERS <3 https://t.co/6JhG2Z9VZu for truckers over 8million and growing rapidly pic.twitter.com/Cc6GsUll2z

The truckers had spent the last week amassing supporters and crossing into Canada to Ottawato air their grievances against Trudeau and his tyrannical jjab mandate.

Trudeau has reportedly relocated from Rideau Cottage to an undisclosed location for “security reasons”, coincidentally just as he announced he had contracted COVID.

“The Prime Minister is continuing to isolate in the National Capital Region & work remotely. We’ve consulted Ottawa Public Health on appropriate protocols. As always, we do not comment on security matters,” stated Trudeau’s office.

Trudeau called the truckers protesting in Ottawa a “fringe minority” with “unacceptable views” earlier this week, despite the support from famous figures like Elon Musk and Joe Rogan.

The truckers have stated that they won’t leave Ottawa until all COVID restrictions are lifted, and given Trudeau’s hardline defiance against them, that could take weeks or more.

Despite freezing weather (-23) a “small minority” of #TruckersForFreedom2022 and tens of thousands of supporters across Canada have come to show their opposition to Trudeau’s “immoral” infringements on their freedoms.
The atmosphere of unity keeps them warm. More are on their way pic.twitter.com/ER3FtbXmP5

The crowd at Parliament Hill in Ottawa breaks into an impromptu round of O Canada.

The scene in Ottawa. I get the impression people here don’t like Trudeau. 😉#freedomconvoy22 pic.twitter.com/1Re5RYkMRD

I was invited by the truckers to give a short speech. Here’s what I said: pic.twitter.com/ZYclZwDBtH

We are in the capital witnessing history. My estimate is around 20 to 30,000 people are here right now, and the rear end of the convoy has still not made it in to the city. Huge majority of Canadians support this cause. pic.twitter.com/nBBccadHfN

One leftist masked person brought a sign accusing the trucker march of being “white nationalist”, but a local immediately demolished that weak narrative on video.

A “small fringe minority” of Canadians with “unacceptable views” in Vankleek Hill, Ont. prepared supplies and food for truckers – including amenities for dogs who are part of the convoy. #TruckersforFreedom #cdnpoli pic.twitter.com/VhvhjbDxgp

MUST WATCH: Indigenous drummers join the Freedom Convoy! Listen to them talk about the importance of freedom. pic.twitter.com/L2QjRomD8w

"The officials are doing everything they can to make this convoy ineffective."@EzraLevant is live in Ottawa with many other Rebels to bring you the other side of the story!

There’s a dude in a bucket truck waving a Canadian flag in downtown Ottawa.

There’s even a mini protest at the Rideau centre. All peaceful and friendly. No one is wearing a mask and zero enforcement. #TruckersConvoy2022 pic.twitter.com/Zmki6RFd1U

Just in case they try to tell you it was "a few hundred" people only on Parliament hill. The best parts were here, far away from Parliament Hill. Insane energy. @randyhillier @EdgarEllenPope @thevivafrei @MaximeBernier pic.twitter.com/Z7PAE8Pel7

The anti-COVID tyranny protests have spread across Canada over the last week, with videos from Vancouver to Toronto showing massive numbers of people marching in solidarity with the trucker convoy.

It's coast-to-coast. This is Downtown, Vancouver right now. #TruckersForFreedom2022 pic.twitter.com/AL2A6JOqVT

Massive turnout in Toronto for the #ConvoyForFreedom2022.

Citizen journalist catches the state broadcaster(CBC) turning their cameras away from the large crowd.https://t.co/cTm6cKHpsA pic.twitter.com/FKl3EfLI11