They’re Coming for Your Kids: MSM Calls for ‘Abolishing Parenthood’ – Forcing Parents to Turn Children Over to the State

The publicly traded Gannett Co., Inc. (NYSE: GCI) is the largest newspaper publisher in the United States reaching over 173 million people monthly with hundreds of subsidiary outlets. These outlets give readers a sense of diversity, but in reality, they are all part of the same billion dollar media conglomerate.

This massive media conglomerate has no problem using its multiple news properties to create narratives to shift public opinion. In fact, last March, TFTP caught the paper in an unscrupulous propaganda tactic — pushing identical content written for different states to stoke fear over guns. At the time, if you Googled, “mass shooting surge,” you were returned results with exactly the same headlines, but for different states.

The headline read as follows: “Mass shootings surge in South Carolina as nation faces record high.” As you continued to scroll down the results, you’d see this exact same headline for other states like Florida, North Carolina, New York, Wisconsin, Pennsylvania, Tennessee, Colorado, Louisiana, Arkansas, Illinois, Michigan, and others. 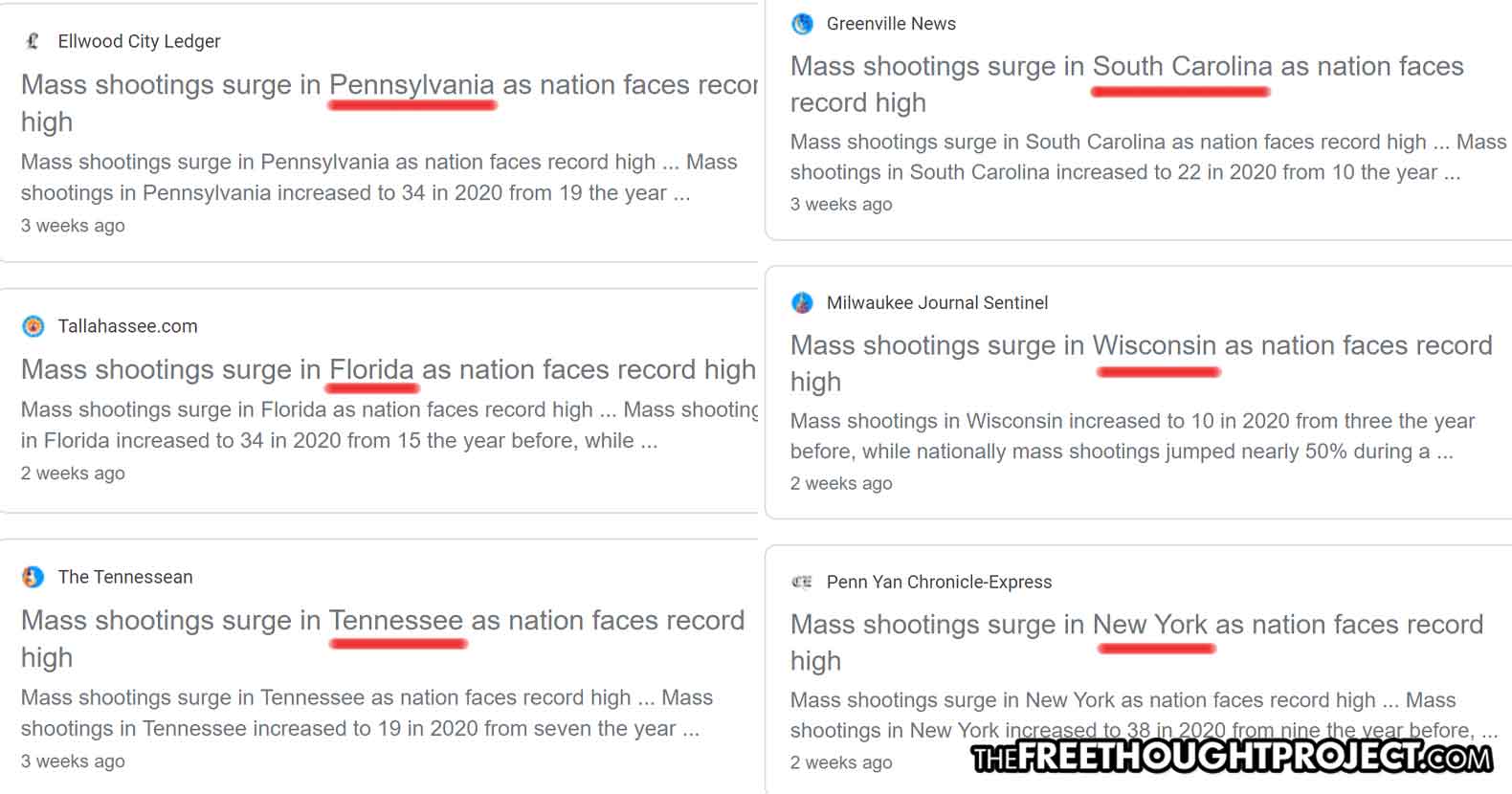 In states which didn’t see a rise in mass shootings, a different title was used but with the exact same point. For example, “Mass shootings fall in Georgia, but nation faces record high.” This title was applied to states like George, Indiana, California, New Jersey, Oklahoma, Alabama, and others.

Given their propensity toward indoctrinating their readership base of millions, USA Today has been in the crosshairs here at TFTP. Most recently, as in just last week, USA Today launched a push to normalize pedophilia. The outlet took to twitter with an extensive thread claiming that:

“In recent decades, the science on pedophilia has improved. One of the most significant findings is that pedophilia is likely determined in the womb, though environmental factors may influence whether someone acts on an urge to abuse.”

After putting out this thread, they received some well-deserved backlash and frantically deleted the tweets, claiming that the thread lacked information. However, the article mentioned in the tweets remains up, which attempts to garner sympathy for pedophiles, claiming that “Pedophiles may not have control over the fact that they are attracted to kids.”

Though it is important to study what makes a person attracted to children, the idea of normalizing it as a sexual preference or “natural tendency” which happens in the womb, is misguided at best and utterly nefarious at worst. Given their most recent piece, however, it may be the latter.

After publishing an article seemingly normalizing the sexual attraction toward children, the USA Today network went after children again — this time urging readers to hand them over to the state — for equity, of course.

In a column for the VC Star, one of USA Today’s California posts, titled, “California should abolish parenthood, in the name of equity,” the outlet unapologetically states that “If California is ever going to achieve true equity, the state must require parents to give away their children.”

In the article, the author attempts to paint parents as the problem with society, claiming that they pass along privilege to their children which fosters an inequitable society. While it is certainly true that rich parents often times have rich kids, countless other children pull themselves out of their unfortunate socioeconomic paradigms on a regular basis.

What’s more, if we look at the global poverty index, there are less humans living in hunger than ever before, and — outside of the pandemic — this number improves every year.

But according to the paper, this is not enough and if we are truly going to achieve perfect communistic equality, we must make “raising your own children illegal.”

As it will take time for legislation like this to come to fruition, the author suggests not waiting for the law, and acting now by taking poor kids from their parents and giving them to rich parents or “homeowners might swap children with their homeless neighbors.”

Abracadabra, now everyone is “equal.”

Unironically, the article completely misses the point that this would in no way foster some equitable outcome. Instead, it would simply reward poor children with the homes of the rich and penalize rich children, forcing them to be homeless. But logic and reason were not expected in such ridiculousness.

The author admits to the dystopian nature of such a proposal, but says it would be a necessary means to a collective utopian dream in which the hive mind of parentless children can be used to achieve greatness.

Perhaps such coercion sounds dystopian. But just imagine the solidarity that universal orphanhood would create. Wouldn’t children, raised in one system, find it easier to collaborate on global problems?

If you criticize this methodology, you are part of the problem, according to the author and are blind, “Because they just can’t see how our relentless pursuit of equity might birth a brave new world.”

While this article by Joe Mathews is labelled under opinion, this totalitarian’s wet dream still had to go through an editor at USA Today and it was approved to be published.

Nothing highlights a news outlet’s attitude toward the world’s future quite like publishing pieces calling for the removal of children from their parents and seeking sympathy for pedophiles.

The idea that the mainstream media, in general, has any credibility left at this point, is utterly mind-blowing — especially since they have been pushing this narrative for nearly a decade.

UK Government Hires Ad Agency to Convince Public They Don’t Need Privacy Previous post
Leaked: Here's How Fauci Profited from Pandemic and How Much He's Worth Next post