This report is based on a tweeted video of a Spanish police officer speaking at a rally. It seems to be Sonia Vascovacci and her activist police group that we have reported on before – Policias por la Libertad.

We’re read enough from independent-minded cops and police organisations in France to know that they clearly recognize and resent being used to oppress a citizenry they were sworn to protect. Check out the work of Mark Sexton on this site, a former UK cop, who is bringing a criminal action against UK government ministers, officials and top media bosses before the International Criminal Court with the help of Dr. Mike Yeadon and other high profile people. There have been recent stories showing police in Romania marching with protestors, as well as stories of police and military dissatisfaction in Italy. See The Draghi Regime Is In Disarray.

As we know, the role of police is critical.

State That They Are United With Police Forces Across Europe 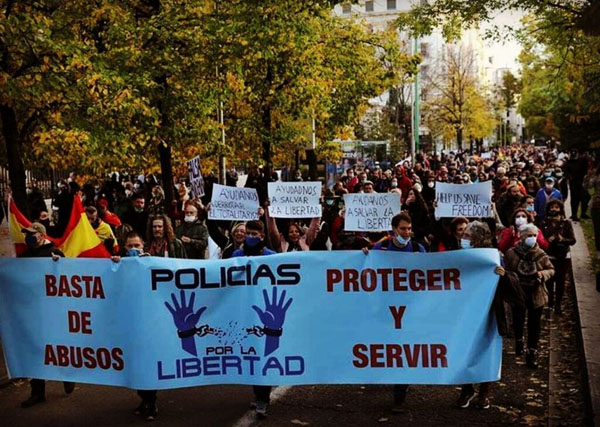 ”We promised to protect and serve the people not the corrupt politicians. We feel very proud to be police, but real police, not hitmen of the government.

Our association is in direct contact with members of security forces in Italy, Portugal, France, Austria, Switzerland, Sweden, Germany, and Holland.

The security forces and the armed forces are the key to all of this.

We have to put ourselves on the side of the people, and turn our backs on the corrupt governments!

We have denounced the Covid passport here in Valencia with our association.

We’re going to demand responsibility from Señor Marlasca for the two states of emergency, and for using the police and the guardia civil to coerce the citizens. We don’t support that.”

This seems to be a critical development, and one we will keep close tabs on.

Thanks to Pélerine for this news tip. Translated with the help of sources in Spain who wished to remain anonymous.