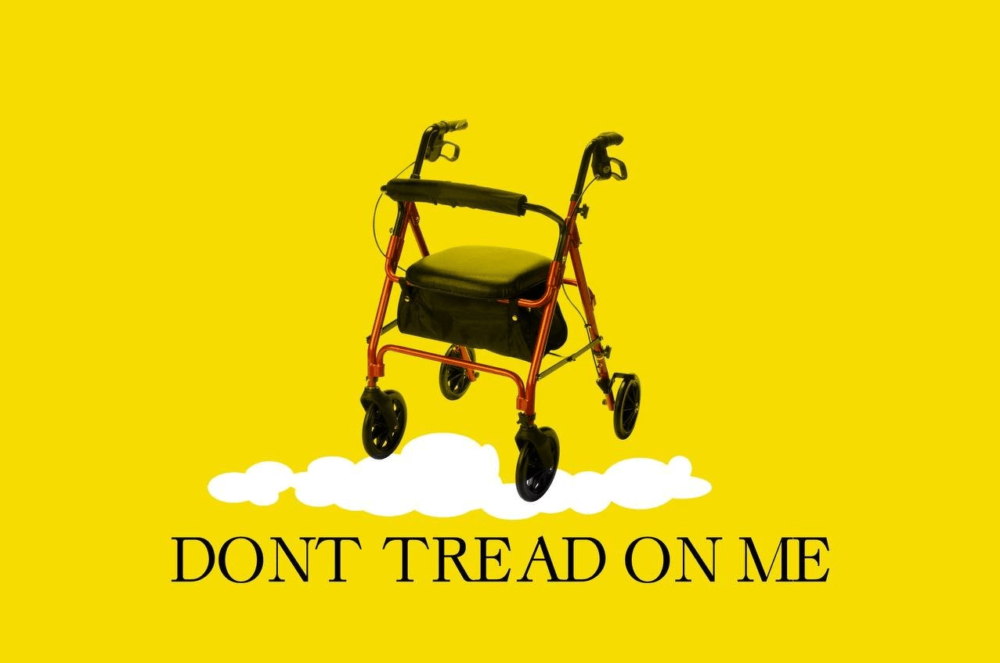 How the Great Reset Tyranny is Turning Into the Great Awakening

There are few words to describe the depth of Canadian Prime Minister Justin Trudeau’s depravity. I’m not going to even try. 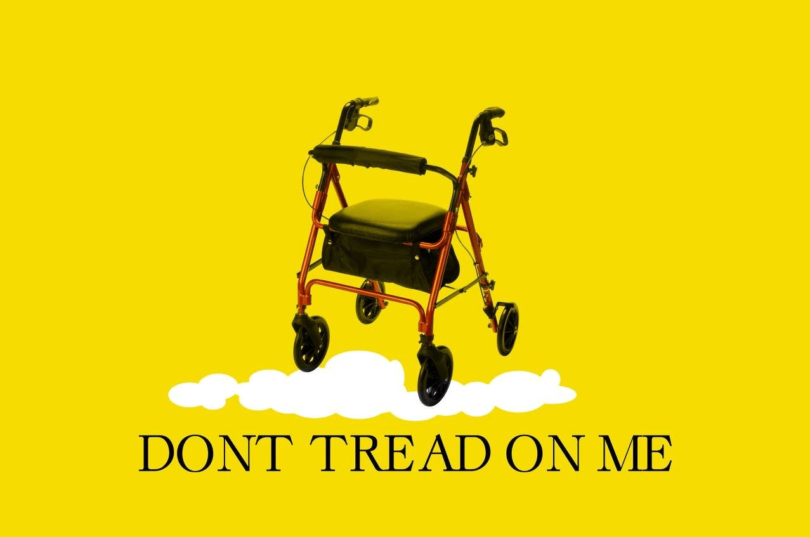 This is a person (because no real man would ever govern like him) is so thoroughly ill-prepared for its job it doesn’t even know how to properly read from the prepared script.

It was all fun and games making Trudeau/Hitler memes until yesterday when Trudeau’s enforcers on horseback trampled an old woman: 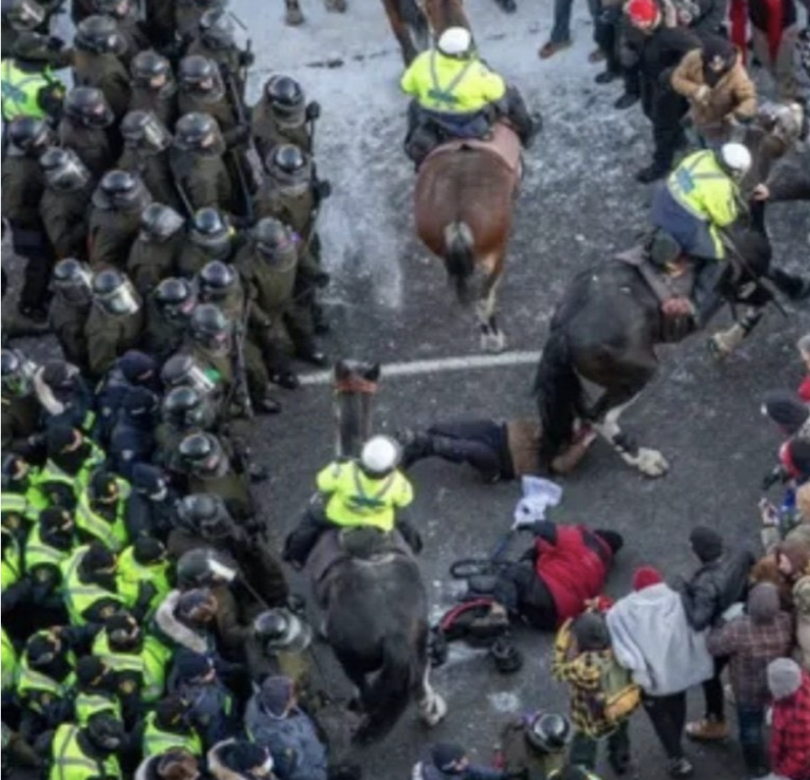 A man with any sense of decency does not send men on horseback into a crowd. The only thing worse than that are the people commenting on this saying some variation of ‘well, she deserved it.’

Yes, she could have gone home.

Yes, she could have gotten the clot-shot.

Yes, she could have just complied with whatever Justin Trudeau told her what her morality was.

But Trudeau could have chosen differently as well. As opposed to acting like a scared little boy worried about facing public ridicule, he could have sacked up and met with the protestors.

Instead, he did what all boy-emperors have ever done, he chose violence and intimidation.

Those who blame the victims are worse than Justin Trudeau. They will never admit it, even to themselves, but their belief in the state as moral arbiter is shaken to its foundation when things like this happen.

So they bluster about playing stupid games, win stupid prizes. Empathy? Who needs that in Davos’ Brave New World.

Those against the protests have their reasons, none of them, however, are morally justified. Because if you allow the state, an immoral construction at its core, to define your morality, you will forever having to justify tyranny to remain on the side of the angels.

Blaming the victim is the easiest thing to do. How many rapists have claimed “she had it coming?” How many abusers every day blame the people they abuse because they are too ashamed to admit they are in the wrong?

We Are All Unclean Now

The part of the Great Reset pertaining to COVID-19 was always about amplifying the divisions between people. To create a new religion around it. Its sacrament is the jjab. Its Lord’s prayer is demonizing ivermectin and trusting the science. Its vestment is the mask.

It has led to such dehumanizing that those who do not comply with the high priests now deserve their fate.

Mario Draghi in Italy declared the unvaccinated to no longer be a part of Italian society:

Are they going to have to sew a yellow syringe onto their clothes now? https://t.co/UtTSVkH5lB

And, in a way, sadly, Trudeau’s supporters are correct. One always has the choice to accept the abuse if the alternative is death. That woman didn’t go to Parliament Square with that choice in mind because, she, sadly, still believed in the religion of the State as a subordinate partner with the people in shaping society.

Those final illusions were trampled fully in the eyes of millions around the world.

Politically, there is no going back for Justin Trudeau. He, along with his supporters, will hide behind their ‘cope’ and refuse to accept the responsibility for their actions.

The Ottawa police are doing the same thing, putting out disinformation about trying to trip the horses and harm the policemen.

At this point those still on the job in Ottawa made a choice as well, to side with tyrants and embrace their own inner one.

Many of them will enjoy finally getting to mete out the violence that festers in their souls, after all, it’s why many of them became cops in the first place.

Those who still have their humanity are now deciding whether to go along or walk away. If they go along they will lose what’s left of their humanity just like men did during World War II.

And their true face has been revealed.

No Zeal for More Tyranny

Now, as bad as things are in Canada, In New Zealand, Prime Minister Jacinda Ardern, tried to follow Trudeau’s script to quell protests in Wellington.

And from all reports there, her efforts have failed completely. She convened a meeting of essentially the national security council on Thursday.

We have no solid reports of what went down.

Therefore, the silence about the outcome of that meeting speaks volumes. The military weren’t willing to get involved, just like what happened to Trudeau in Canada.

Moreover, New Zealand’s police commissioner Andrew Coster came out with a public statement saying negotiation was the path forward, something Arden has rejected out of hand, just like Trudeau, both reading from the same Davos’ script.

“Coster said negotiations and de-escalation were the only safe ways to resolve the protest and he would continue to talk to the protesters. Police say there are about 800 protesters but numbers could rise over the weekend.

Coster said any forceful police action would risk injuries to the public and could turn a largely peaceful protest violent, and could increase the number of protesters.”

Ottawa Police Chief Peter Sloly tried to hold the line against Trudeau’s megalomania earlier this week. That resulted in him resigning, presumably because he wouldn’t give the order to roust up the protestors and beat heads, and a more pliant enforcer put in his place.

The result is what we’re witnessing now in Ottawa:

Look at the police drag this guy between the trucks so an officer can knee him as as hard as he can. None of the other cops seem to care about his behaviour as he quickly checks to see if any Canadian saw him pic.twitter.com/tcD4URV1vT

The casual obscenity in this clip is the newscasters’ commentary about police restoring order.

The reality is that Ardern and Trudeau are both hanging on by a thread because public opinion already turned against them. The only thing propping Trudeau up at this point is the shock at the speed he has escalated events. That shock will wear off very soon.

If parliament doesn’t act to limit/censure or simply get rid of this guy, Canadians will have a much bigger problem on their hands.

Too many Canadians are still asking, “Is this Canada?” When they should be stating, “This is not Canada.”

Stop asking for permission to feel outraged and feel the outrage.

In New Zealand, the veil of authority for Arden is thinner thanks to Trudeau’s mistakes in Ottawa. No doubt they are seeing the same things we are and want no part of it. The knives will come out for Ardern quickly if she doesn’t back down.

I say all the time, spooks start civil wars, militaries end them. In Canada, the civil war there is just beginning. What we’ve not seen in New Zealand means it’s likely over before anyone even realized they were in one.

The Great Reset rests on tyrants like Justin Trudeau to win through fear, intimidation and the banal corruption of weak people to support them. With each image of peaceful people being trampled under the bootheel of Canadian stormtroopers, more people awaken from the slumber of the comfortable lie the government protects us from chaos.

That’s what the State is folks, violence. Always has been. This is why Klaus Schwab and his minions like Trudeau, Ardern and others will fail [You can see Schwab’s list of “Young Global Leaders” HERE]. There is no law these people recognize. There is no restraint on their behavior they feel is justified for their holy cause.

The sooner we accept that, like many of the truckers who organized this protest, the sooner we can all begin bridging the divide.

I have spent 12 days live streaming from Ottawa. I did not see one shred of violence until the police showed up.