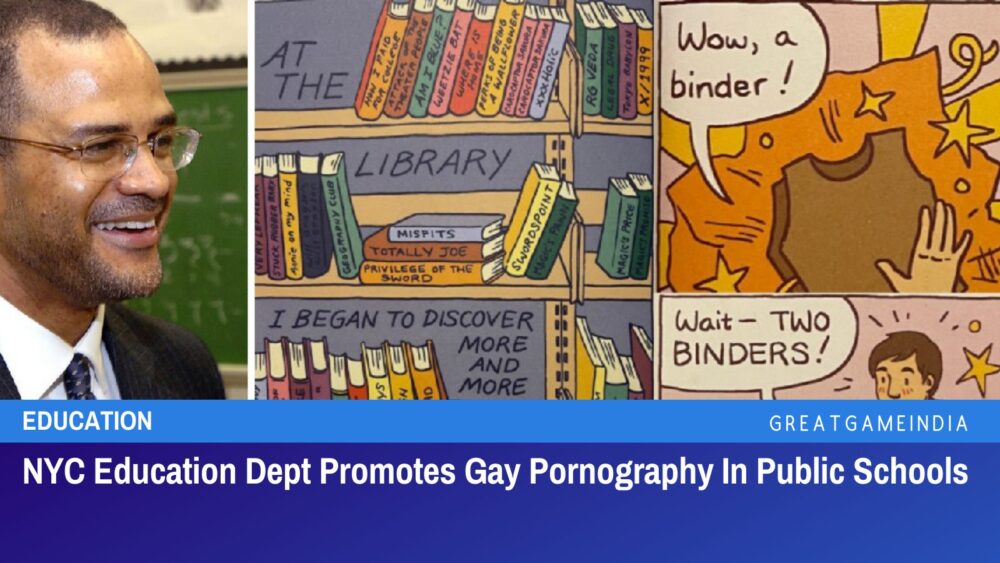 Within the controversial book, by page 213, the protagonist is fantasizing about a double mastectomy. Such form of content is recommended for 14-year-olds and up. This has led to some serious concern over the NYC Education Department promoting gay pornography in public schools. 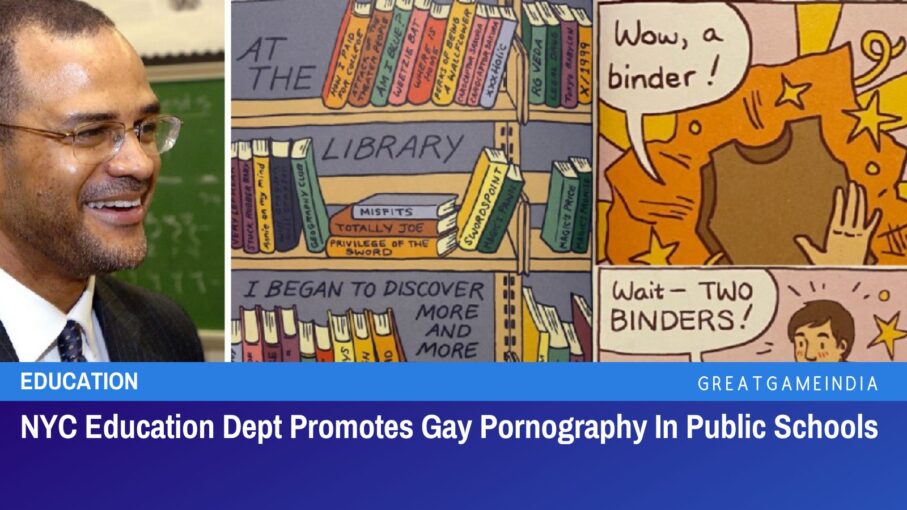 A New York mother contacted the New York City Department of Education to inquire about why a book containing child pornography was permitted in public school libraries in the city, and to request that it be reassessed for inclusion in the collection.

The reaction she received was that having graphic sexual pictures in the library collection is both acceptable and advantageous for pupils.

She inquired, “Why is there child pornography in NY School Libraries?” She included explicit photographs from the book when she sent the enquiry. According to the DOE, the book “neither depicts or describes pedophilia, child rape, or desensitizes to predators” based on such photos.

Watch the video below:

Gender Queer: A Memoir, by Maia Kobabe, is a coming-of-age novel about a girl who grows up with hippie parents, discovers herself at odds with the rest of campus culture, struggles with puberty, and fantasizes about having a penis. The novel even mentions discovering materials at the library that inspired the protagonist to explore her gender identity.

“Why is this graphic pornographic and grooming text in the NY school libraries?” the New York City mom asks. “Our family has been harmed by gender ideology and pornography in schools, leading to three hospitalizations and a suicide attempt. Transition was not therapeutic and yet everywhere we turn, there is more propaganda pushing our children towards transition. There are no resources on detransition. Why is this?” she begs for assistance, eager for support for her own child before he or she suffers further damage.

“Why is this content in schools? Who is looking out for the mental, physical and sexual health of our adolescents? Why are you grooming them into a status as a lifelong patient and surgical proving ground?” she asks. The DOE has not responded other than to say that the content is suitable and beneficial to teenagers.

“I would love to speak with someone in your office to discuss how we can better help adolescents dealing with very typical experiences of dysphoria,” the mom writes. “There is nothing more transphobic than failing to help dysphoric kids like mine. I’m terrified of what is happening.” 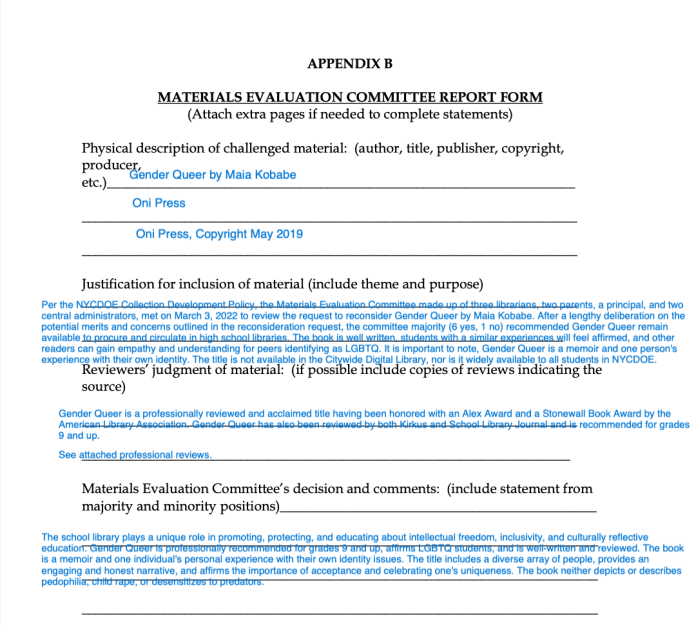 The New York State Department of Education suggested the book as a “favorite,” and when they were informed of its contents, they announced that an inquiry would be conducted into how the book wound up among those lauded by the department.

The work has earned multiple accolades for Kobabe, who utilizes the pronouns “e/em/eir.” However, owing to the book’s explicit portrayals of sexual actions and obvious enticement for children to reconsider their gender identity, the visuals have offended parents.

The book contains images of blow jobs, as well as many other graphic sexual material. When the main character receives her first period in the initial portion of the novel, it’s like stuff out of a horror movie, and although menstruation is never enjoyable, the fact that it continues to be an origin of utter agony for the primary character indicates that there is a separation among both her mind and body.

The fact that menstruation is a horror for almost every woman is never mentioned in the book. It would be simple for a young girl to read this and think to herself, “I also hate my period,” and conclude that she isn’t intended to be female.

Because of her intrigue with figure skater Johnny Weir, the main character develops a love for femme clothing, becomes infatuated with boy band One Direction, and, in the apparent lack of a healthy comprehension of intimate relationships, decides to use Tinder in grad school for a pointless hook-up merely to learn what kissing is like so she can include it in One Direction fan fiction.

This, according to the New York City Department of Education, is sufficient intellectual stimulation for pupils. They informed the unidentified New York City mother who contacted them that they “recommended Gender Queer remain available to procure and circulate in high school libraries,” despite her own family’s issues with gender identification.

The incorporation of the book is justified by the New York City Department of Education, which claims that “other readers can gain empathy and understanding for peers identifying as LGBTQ. It is important to note,” they write, “Gender Queer is a memoir and one person’s experience with their own identity.”

By page 185, the protagonist is immersed in a world where men and women refuse to use sex-based pronouns and undertake medical sex modifications.

She bemoans the fact that she never went through adolescence as a kid and switches her pronouns. She’s absolutely adamant about never having sex, and she despises all bodily fluids.

“I just got the biggest tingle down my spine,” the main protagonist exclaims after learning “e/em/eir” pronouns, which tingle evidently signifies this is the appropriate thing to do.

Whenever anyone puts the pronouns incorrect or persists to use female ones, the main character finally cries of “physical pain.” The figure is around 25 years old at this stage, a grownup capable of making “eir” own decisions rather than a gullible adolescent.

The main character dismisses worries that merely being female in civilization is problematic, and declares that a “third option” has always been desired. The accessories and practicalities of being female seem to have been clearly overwhelming earlier in the book, but by page 197, the sensation of becoming a “third gender” is abruptly something that had been “always wanted.”

It’s as if the protagonist as well as the writer are recreating their own history in real time and then rejecting that they are doing it.

The NYCDOE’s Materials Evaluation Committee determined that all these items ought to be available in school libraries. They defend their choice by claiming that the book has won numerous honors, without mentioning that these honors are given by groups dedicated to advancing minors’ gender transition, including Stonewall, or by far-left activists, like the American Library Association.

The Materials Evaluation Committee (read below) advises school librarians to “make sure that your collection development criteria match the curriculum, age level of your students and the religious and cultural atmosphere of your community” in guidelines for school librarians. The book is recommended for 14-year-olds and up.

The DOE claims that the book “affirms LGBTQ students” in the school library, despite the fact that “affirmation” is not the only or even the most effective way.

The New York mom contacted Chancellor of Schools David Banks upon receiving confirmation from the DOE that such a book will indeed be accessible to children in public school libraries. She stated:

“This is not safe work work, but apparently it’s safe for our kids. Do you agree? Is this what the Democratic agenda is?” she asks with mounting frustration.

“I am a lifelong liberal, leftist feminist who has voted Dem all my life,” she tells Chancellor Banks, who has yet to respond. “I’m also a mom of a trans-identifying child who is mentally-ill. This is not helpful. Please stop. When can I get someone, ANYONE, to respond???”

This mother’s frantic appeal to cease teaching our children to despise themselves has gone unheeded. The NYC DOE appears to believe that supporting a teen’s desire to medically eliminate healthy bodily features, as well as a teen’s dread of regular medical appointments, is acceptable.

The Gov’t is After Your Money: Beware of the Government’s Push for a Digital Currency Previous post
BOOM! Ukraine Becomes the First Country to Implement the Great Reset Next post