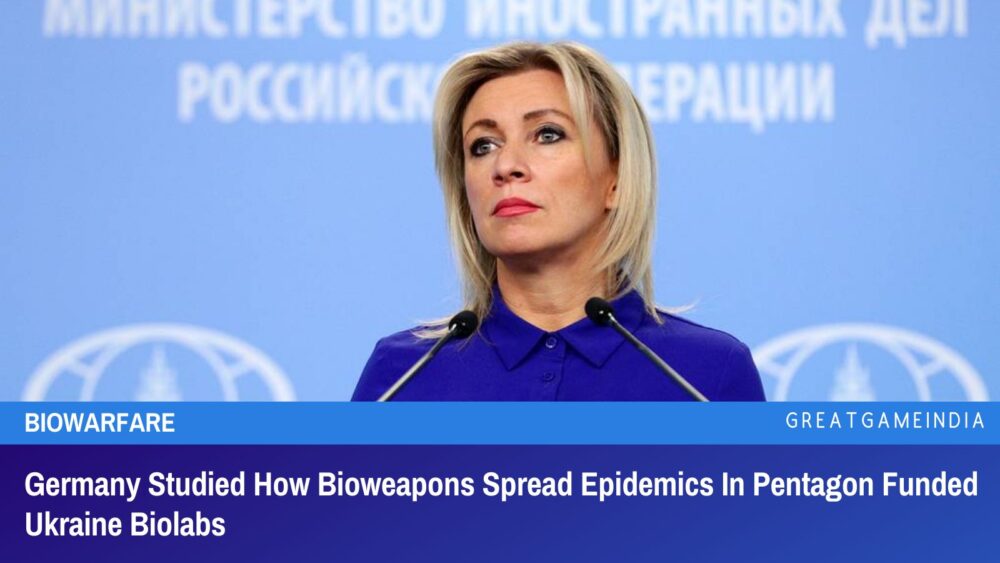 Allegations have been leveled against Germany that it studied how bioweapons spread epidemics in Pentagon funded Ukraine biolabs. 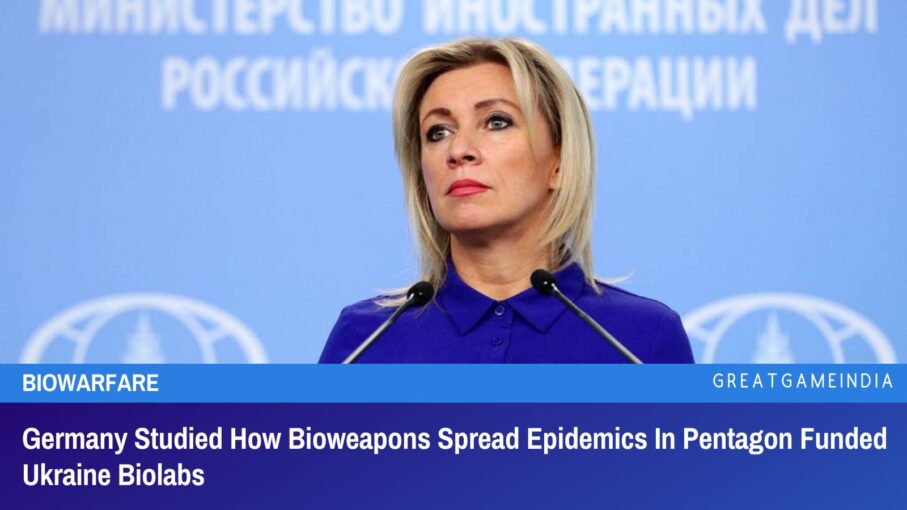 The information was revealed by Maria Zakharova, Director of the Russian Foreign Ministry’s Information and Press Department, during an interview.

Question: It was recently reported that Russian troops found new files on military biological activity in Ukraine during a special military operation in Ukraine. Is it possible for you to expand on this?

Maria Zakharova: As part of the Special Military Operation in Ukraine (SMO), Russia’s Armed Forces discovered papers that cast light on the US Defense Department’s bio-military project in Ukraine. The program’s researchers were looking into the most deadly viruses – potential biological weapons agents – that have geographical focuses in both Ukraine and Russia.

They were also looking into the methods in which these pathogens spread diseases. Because of the scope of the project, it is clear that a significant portion, if not the majority, of the knowledge about the American military program is kept hidden from the rest of the world.

On March 9, 2022, Undersecretary of State for Political Affairs Victoria Nuland told the US Senate Committee on Foreign Relations that Washington was attempting to block the transfer of some scientific materials from Ukrainian bio-laboratories to Russian forces.

Igor Kirillov, Chief of the Russian Armed Forces’ Radiation, Chemical, and Biological Defense Forces, revealed US bio-military efforts in Ukraine in news conferences on March 7, 10, 17, 24, and 31, based on intelligence gathered during the Russian Armed Forces’ SMO in Ukraine. He also presented findings based on professional analysis. These materials are still being studied by researchers.

Question: What steps is Russia doing to ensure that the US clarifies its military biological collaboration with Ukraine?

Maria Zakharova: Russia has publicly revealed the factual information that have come to the forefront so far at the UN and other international organizations, and has called on the US officials to deliver clear explanations, but Washington, unsurprisingly, appears unwilling to reveal any purposeful data with the public about its military biological program in Ukraine.

Furthermore, clearly believing that offense is the best defense, the White House has initiated yet another propaganda campaign based on the false claim that Russia’s attempts to draw international attention to the actions of US military biologists in Ukraine are nothing but a smoke screen that Moscow will seek to use to conceal up any potential use of biological or chemical weapons during the special military operation.

This clumsy attempt by the US to shift public attention away from the critically combustible topic of US-controlled biological facilities in Ukraine by drowning it in this “apocalyptic sensation” was surprisingly backed by German political leadership. Several prominent German politicians and bureaucrats, including Federal Chancellor Olaf Scholz, have issued statements that echo the US narrative by issuing righteous threats and warnings directed against Russia.

Berlin’s formal preemptive verbal position in the sense of the Ukraine crisis is consistent with the strategy it has followed for a long time in the context of the crisis (which is not helping to resolve it now and previously led the Minsk process to a stalemate with its deliberate pro-Kiev slant), but it stands out in its outright pessimism of the overall narrative of anti-Russia propaganda that has been coming from Germany in recent weeks.

First and foremost, given the critical condition that, even before the Russian Armed Forces began this special military operation, Germany and the US had been conducting strong military biological activities in Ukraine for many years and may still be doing so. We are certain that this is essentially what drives Germany to be more active than other EU nations in attempting to link our country to criminal schemes involving the deployment of biological and chemical weapons in Ukraine and the unliberated Donetsk and Lugansk people’s republics.

Question: Is there any more information available about Germany’s military biological actions in Ukraine?

Maria Zakharova: The following points can help you better grasp the situation. The German Government has been enacting the German Biosecurity Programme (GBP) since 2013, under the auspices of the German Federal Foreign Office, that also involves partnership projects with government agencies and research organizations in focus countries, which Ukraine joined in 2014, the year of Maidan.

German experts from the German Armed Forces Institute of Microbiology (Munich), the Friedrich Loeffler Institute (Greifswald-Riems Island), the Bernhard Nocht Institute for Tropical Medicine (Hamburg), and the Robert Koch Institute (Berlin), all of which specialize in lethal biological agent research, are involved in practical activities.

The third stage of the GBP will be executed in 2020-2022, per the German Federal Foreign Office. From the publicly available sources, we can deduce that the GBP’s declared technological objectives comprise, among other things, acquiring epidemic intelligence in third countries, including using big data technology, and developing partner countries’ infrastructure for handling harmful biological agents.

According to its own records, the Institute of Experimental and Clinical Veterinary Medicine in Kharkov has become the major Ukrainian counterpart of the German Armed Forces’ Institute of Microbiology since 2016. Under the Ukrainian-German initiative “Initiative on Biological Safety and Biological Defense in the Management of the Zoonotic Risks at the Outer Borders of the European Union,” the two institutes collaborate.

The notion that its stated objective is to “improve the biological defense and security situation” in Ukraine, “particularly in the east of the country” raises the rhetorical query of which boundary the German military scientists deem an outside boundary for their professional interests. Is it the border between Russia and Ukraine?

In its materials, the Institute of Microbiology states that the initiative is linked to the “potential threat of biological terrorism” in Ukraine, despite the country’s ongoing hostilities in its eastern areas.

This is clearly a manner of sending a subliminal message about the DPR and LPR’s possible “involvement” in developing plans to employ globally forbidden biological weapons.

The German military has been intentionally intimidating their Ukrainian colleagues for a long time, psychologically pushing them against the Donbass republics in the process. Ukrainian biological safety experts are constantly present at the Institute of Microbiology of the German Armed Forces’ medical biodefense conferences, which are held on a regular basis.

To ensure security against a prospective biological attack, it is clear that the potential biological agents with which it can be made must first be studied. To put it another way, research in the subject of biological or chemical weapons is required.

The German Armed Forces (AFG) have sufficient knowledge and actual competence in this field, as the notorious incident with the inexplicable poisoning of blogger Alexey Navalny revealed.

Such a high level of knowledge – assuming that all assertions were factually correct – shows that the AFG is capable of synthesizing dangerous compounds on its own, including the infamous Novichok and its marks.

On the Baltic Island of Riems, Germany’s Friedrich Loeffler Institute, which is in control of the center for the study of the most risky viruses and zoonotic infections, retains visible collaboration with the Ukrainian State Research Institute of Laboratory Diagnostics and Veterinary-Sanitary Expertise (Kiev), the State Scientific Control Institute of Bio-Technology and Strains of Microorganisms (Kiev) and also with the Institute of Experimental and Clinical Veterinary Medicine (Kharkov) which collaborates in conjuncture with the AFG Institute of Microbiology.

The Friedrich Loeffler Institute in Ukraine has been studying Crimean-Congo hemorrhagic fever. In 1944, Soviet scientists detected it for the first time on the Russian Crimean peninsula. The institute tasked its Ukrainian colleagues to take samples of ectoparasite recipients of bats that were moved to the aforementioned Reims Island per established arrangements, according to documented proof.

In Ukraine, the Bernhard Nocht Institute for Tropical Medicine has focused its efforts on the most deadly fevers, including Denge, Chikungunya, West Nile, and Usutu, to mention a few.

This list of Germany’s bio-military efforts in Ukraine is by no means complete. It is not impossible that the Russian Armed Forces would uncover more documents as the special military operation develops.

According to verifiable accounts, Germany’s efforts on biological security was tightly linked with its American allies, who set up a network of at least 30 biological laboratories in Ukraine. They were active in perilous studies in addition to their other interests.

We demand that German officials stop circulating false information regarding our country’s plans to employ weapons that are prohibited by international law. We feel that such declarations will only encourage neo-Nazi battalions to carry out horrific provocations, and that Berlin will have moral responsibility for the sad consequences.

The Next ‘Great Pandemic’ Claiming Astronomical Death Counts is Now Being Marketed to the Public Previous post
Did a Fragment of the ‘True Cross’ of Christ Just Sink with Russia’s Destroyed Warship? Next post