The world first started to hear about a novel coronavirus in early January 2020, with reports of an alleged new pneumonia-like illness spreading across Wuhan, China. However, the world did not actually know of Covid-19 until February 2020, because it was not until the 11th of that month that the World Health Organisation officially named the novel coronavirus disease Covid-19.

So with this being the official truth, why does United States Government data show that the U.S. Department of Defense (DOD) awarded a contract on the 12th November 2019 to Labyrinth Global Health INC. for ‘COVID-19 Research’, at least one month before the alleged emergence of the novel coronavirus, and three months before it was officially dubbed Covid-19?

The shocking findings, however, do not end there. The contract awarded in November 2019 for ‘COVID-19 Research’ was not only instructed to take place in Ukraine, it was in fact part of a much larger contract for a ‘Biological threat reduction program in Ukraine’.

Perhaps explaining why Labyrinth Global Health has been collaborating with Peter Daszak’s EcoHealth Alliance, and Ernest Wolfe’s Metabiota since its formation in 2017.

The Government of the United States has a website called ‘USA Spending‘, an official open data source of federal spending information. According to the site as of 12th April 2021, the US Government has spent a mind-blowing $3.63 trillion “in response to COVID-19”. But that’s not the only information on Covid that can be found on the site.

Hidden within the ‘Award Search’ are details on a contract awarded by the Department of Defense to a company named ‘Black & Veatch Special Projects Corp‘, which is allegedly “a global engineering, procurement, consulting and construction company specialising in infrastructure development”.

The contract was awarded on September 20th, 2012 and is described as “Professional, Scientific, and Technical Services”. Obviously, this is very vague and most likely of little interest to anyone who happens to stumble across it. But there is something contained deep within the details that should be of interest to anyone and everyone.

The ‘Award History’ for the contract contains a tab for ‘Sub-Awards’ detailing the recipients, action date, amount, and a very brief description for 115 Sub-Award transactions. Most of the Sub-Awards are extremely mundane for things such as “laboratory equipment for Kyiv”, or “office furniture for Kyiv”.

But there is one Sub-Award that stands out among the rest, and it was awarded to Labyrinth Global Health INC for “SME Manuscript Documentation and COVID-19 Research”.

But the shock doesn’t end there, because the place the contact for Covid-19 research was instructed to take place was Ukraine, as was the entire contract awarded by the DOD to Black & Veatch Special Projects Corp.

The contract details found on the ‘USA Spending’ site actually reveal that the specific DOD department that awarded the contract was the Defense Threat Reduction Agency (DTRA). The contract was awarded 20th September 2012, and concluded on 13th October 2020. 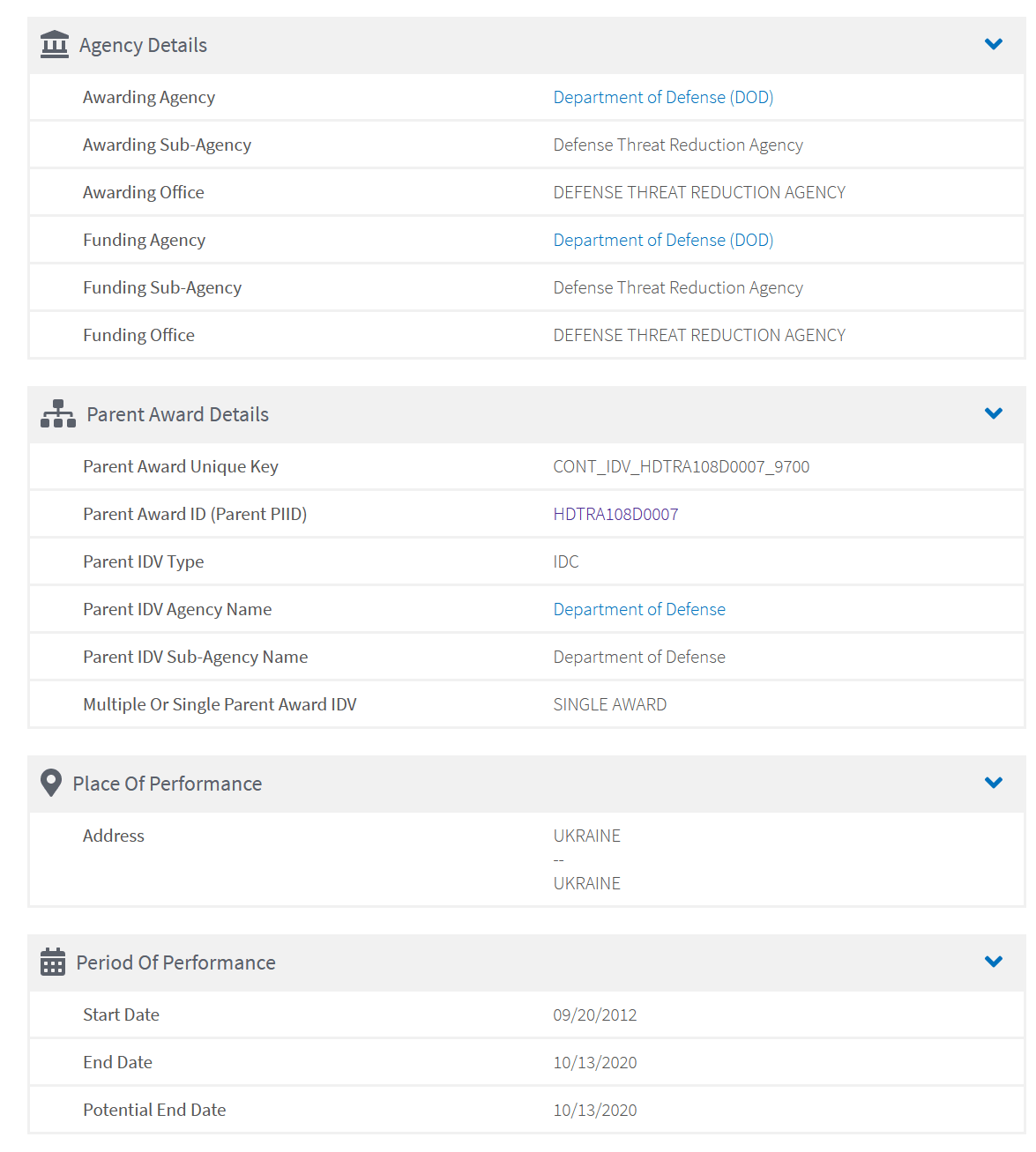 Whilst the details are vague, the US Government site also reveals that $21.7 million of the $116.6 million contract was spent on a ‘Biological threat reduction program in Ukraine’.

Why did the Department of Defense pay a company that is allegedly “a global engineering, procurement, consulting and construction company specialising in infrastructure development”, to help implement a “Biological threat reduction program in Ukraine’?

And why did both the DOD and said company then pay Labyrinth Global Health INC to carry out COVID-19 research in Ukraine at least one month before the alleged emergence of the novel coronavirus, and three months before it was officially dubbed Covid-19?

Founded in 2017, Labyrinth Global Health is allegedly a “women-owned small business with deep expertise and a proven track record supporting initiatives for scientific and medical advancement.”

They describe themselves as “a multicultural and international organization with offices in four countries and a team of experts with diverse backgrounds and competencies, including microbiology, virology, global health, emerging infectious disease nursing, medical anthropology, field epidemiology, clinical research, and health information systems.”

One of those offices just happens to be located in Kyiv, Ukraine, which the company dubs “a gateway to Eastern Europe”. 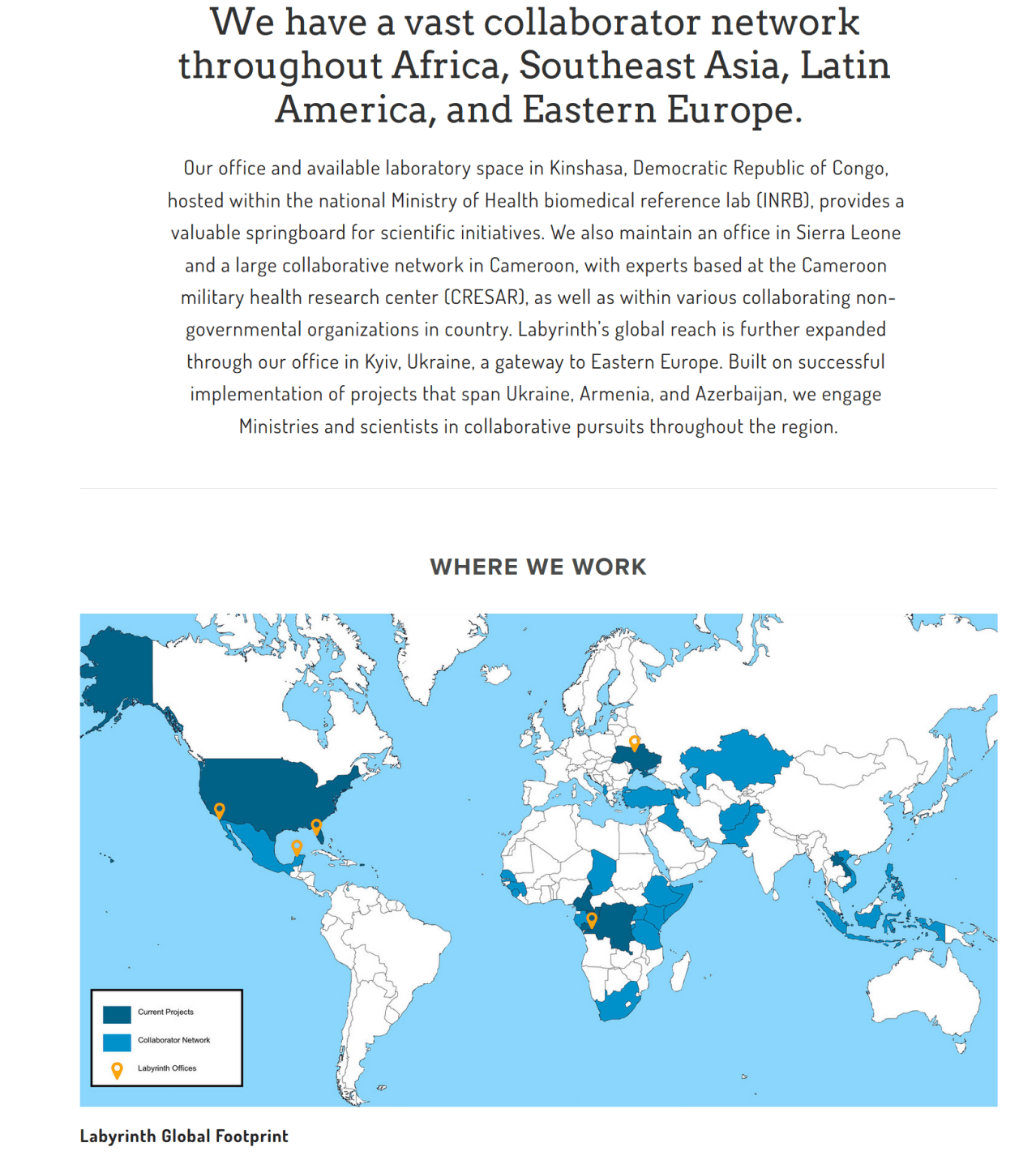 Karen Saylors, PhD, who co-founded Labyrinth Global Health, has allegedly worked in the international public health field for over a decade and has spent many years living in Africa establishing global surveillance networks, “working with partners to improve Global Health policy on infectious disease detection, response, and control”.

At Labyrinth, Dr Saylors specialises in studies that aim to understand and mitigate the biological and behavioural risks of disease transmission. Dr Saylors worked with Oxford University Clinical Trials Network in Vietnam on zoonotic disease surveillance research and continues to coordinate with regional partners on emerging outbreaks in animal and human populations.

But who are the partners that Dr Karen Saylors and Labyrinth Global Health choose to work with? They are none other than the ‘Eco-Health Alliance’ and ‘Metabiota’.

Launched in 2009 and funded by USAID, PREDICT was an early warning system for new and emerging diseases in 21 countries. It was led by the University of California’s (“UC”) Davis One Health Institute and core partners included EcoHealth Alliance (“EHA”), Metabiota, Wildlife Conservation Society, and Smithsonian Institution, and as we’ve just revealed; Labyrinth Global Health. PREDICT was a forerunner of the more ambitious Global Virome Project.

The USAID describes PREDICT as having made “significant contributions to strengthening global surveillance and laboratory diagnostic capabilities for both known and newly discovered viruses within several important virus groups, such as filoviruses (including ebolaviruses), influenza viruses, paramyxoviruses, and coronaviruses“.

Here’s one of the many studies published by Eco Health Alliance, Metabiota and Labyrinth Global Health proving the connection –

PREDICT partnered with the non-profit Eco Health Alliance (EHA) to carry out its 9-year effort to catalogue hundreds of thousands of biological samples, “including over 10,000 bats.” A PREDICT-funded 2015 study on “diversity of coronavirus in bats” also included Peter Daszak, president of EHA, among its participants.

Eco Health Alliance is listed as a partner of the Wuhan Institute of Virology (“WIV”) on archived pages of its website and was mentioned as one of the institute’s “strategic partners” by the WIV’s Deputy Director-General in 2018.

Notably, the relationship between the WIV and the American Biodefense establishment was advanced by EHA policy advisor, David R. Franz, former commander at the US bioweapons lab at Fort Detrick.

WIV’s Dr. Shi Zhengli, a.k.a. “Batwoman,” had also worked with EHA’s Daszak on bat-related studies. As far back as 2005, Daszak and Zhengli were conducting research on SARS-like coronaviruses in bats. Several PREDICT-funded studies on SARS-like coronaviruses and Swine Flu count with both Zhengli’s and Daszak’s contributions. Perhaps the most noteworthy of these is a 2015 PREDICT and NIH-funded study she co-authored entitled: ‘A SARS-like cluster of circulating bat coronaviruses shows potential for human emergence’.

Meanwhile, Nathan Wolfe is the founder of Metabiota and the non-profit Global Viral. He spent over eight years conducting biomedical research in both sub-Saharan Africa and Southeast Asia. Unsurprisingly, Wolfe is a World Economic Forum Young Global Leader.  More notably, since 2008 he had been a member of DARPA’s DSRC, Defence Science Research Council, until it was disbanded.

All of these people and organisations have been working for at least the last decade studying coronaviruses and helping to set up Biolabs in Ukraine. All using US Department of Defense funds to do so. You can read much more about this here, here and here. 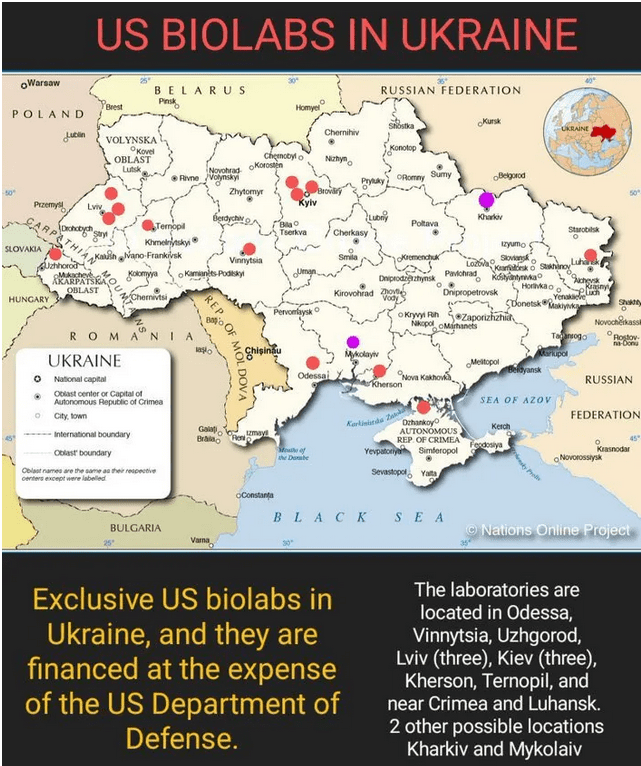 Putting the Biolabs in Ukraine to one side, for now, let’s return to the subject of Covid-19. If the US Government was funding Covid-19 research before Covid-19 was publicly known to exist then this suggests they either knew Covid-19 existed naturally, or they were involved in constructing this virus in a lab.

But if the contract evidence isn’t enough for you to come to this conclusion (it should be), then perhaps coupling it with evidence that the US National Institute of Allergy & Infectious Diseases (NIAID), and Moderna had a coronavirus candidate in December 2019 will be.

A confidentiality agreement which can be viewed here, states that providers ‘Moderna’ alongside the ‘National Institute of Allergy and Infectious Diseases (NIAID) agreed to transfer ‘mRNA coronavirus jjab candidates’ developed and jointly-owned by NIAID and Moderna to recipients ‘The University of North Carolina at Chapel Hill’ on the 12th December 2019.

Investigation Launched After ‘Mystery’ Surge in Deaths of Newborn Babies Previous post
UFOs, Men in Black, and Secret Documents: The Strange Death of US Defense Secretary James Forrestal Next post