Davos Elites Warn ‘Painful Global Transition’ Should Not Be Resisted

As World Economic Forum head Klaus Schwab proclaimed that “the future is built by us” at the opening of the annual Davos gathering, two other European elites declared that the global energy crisis is a “transition” that will be “painful” for most, but should not be resisted by nations tempted to preserve their own sovereignty over the “global agenda.”

Schwab called those summoned before him a “powerful community,” and declared “We have the means to improve the state of the world, but two conditions are necessary: The first one, is that we act all as stakeholders of larger communities, so that we serve not only our self-interests but we serve the community. That’s what we call ‘stakeholder responsibility.’”

“And second, that we collaborate,” he continued, adding “And this is the reason why you find many opportunities here during the meeting to engage into… action and impact initiatives to make progress related to specific issues on the global agenda.”

NEW – Klaus Schwab tells attendees at his World Economic Forum in Davos that "the future is being built by us." pic.twitter.com/yIqB4jclNd

As further discussions progressed Monday, German vice-chancellor Robert Habeck spoke about the energy crisis, warning that governments of individual nations should not seek to protect their own citizens, but instead follow “the rule of the markets”.

In other words, countries need to fall into line with the globalists’ ‘Great Reset’ agenda:

During a World Economic Forum panel on the energy crisis, German vice-chancellor Robert Habeck said countries should resist temptation to look after their own interests first. He added sustainability requires change to the "rule of the markets." pic.twitter.com/BYzQqMRDbk

Elitists drool over possibilities of their ‘Great Reset’

During another discussion, Norwegian finance CEO Kjerstin Braathen described global energy upheaval as a “transition” while admitting there will be mass shortages and economic hardship, but claiming the “pain” is “worth it.”

Speaking about small and medium businesses in Davos, Norwegian finance CEO Kjerstin Braathen says energy transition will create energy shortages and inflationary pressures, but this "pain" is "worth it." pic.twitter.com/Ne70lRle5W

Interesting that this Davos elitist used the exact same phrasing as Joe Biden on the same day:

Joe Biden: "When it comes to the gas prices, we're going through an INCREDIBLE transition" pic.twitter.com/8TGnc7vFa8

Journalist Andrew Lawton documented more of Davos cabal drooling over the possibilities for global control that their Great Reset could engender:

Alibaba Group president J. Michael Evans boasts at the World Economic Forum about the development of an "individual carbon footprint tracker" to monitor what you buy, what you eat, and where/how you travel. pic.twitter.com/sisSrUngDI

On the World Economic Forum's panel on a "Reimagined Global Tax System," Oxfam executive director Gabriela Bucher calls for a global 25 per cent corporate tax rate and complains that countries are lowering taxes to be competitive. pic.twitter.com/zuJqsdXlUM

A CNN anchor, the chairman of Credit Suisse, and France's top central banker giddily discuss the arrival of central bank digital currencies within five years at the World Economic Forum in Davos. pic.twitter.com/nKPN2qRUI3 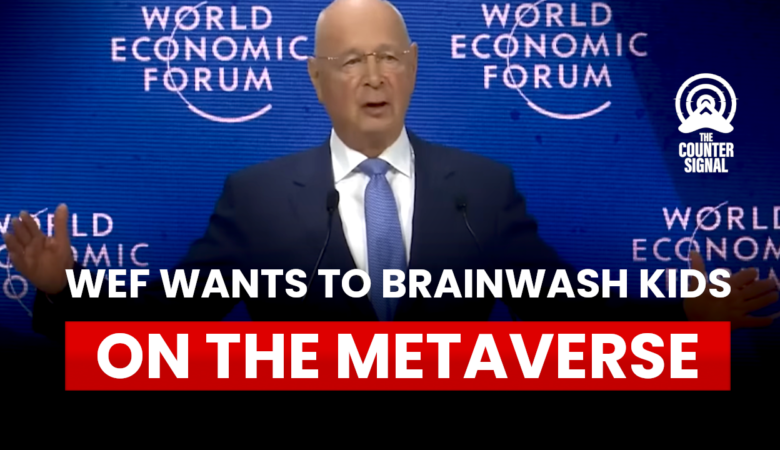 WEF Wants to Brainwash Students on the Metaverse