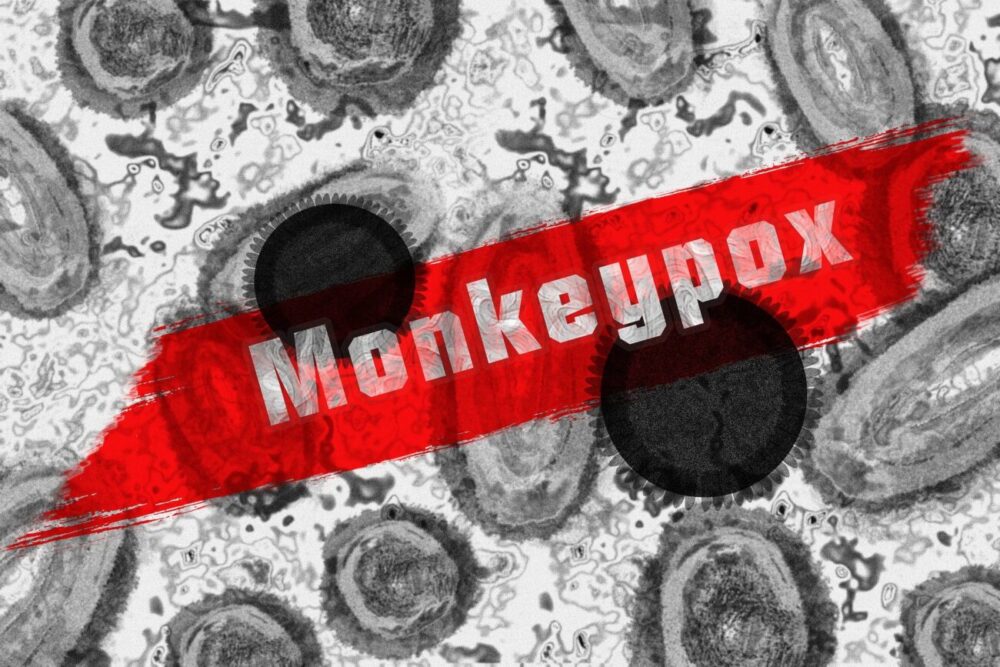 Once upon a time…

…along came The Monkeypox virus! 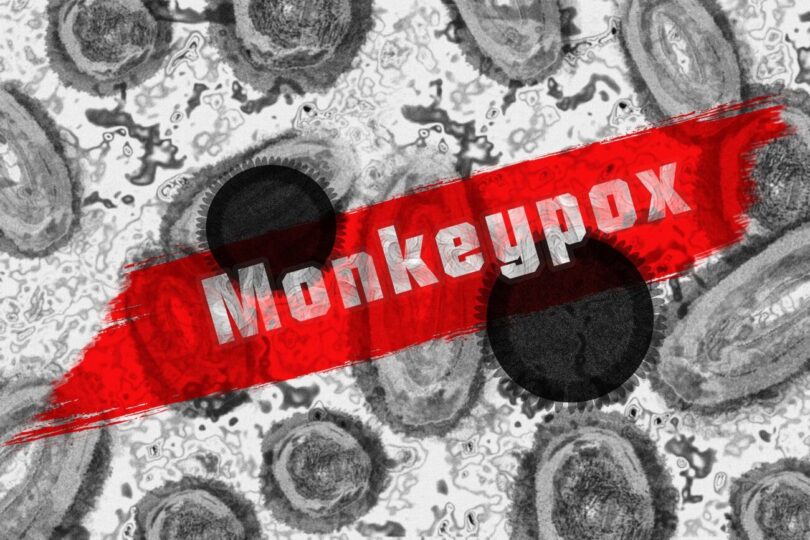 Symptoms may include a desire to swing from tree to tree, to pick breakfast bugs off your mate, and to screech, yell, and generally monkey around. But seriously….

According to the Centers for Disease Creation (CDC), the agency that created at least eight Genus categories of Pox Diseases, Monkeypox is called a “rare disease.” However, Monkeypox cannot be considered “rare,” if the CDC also claims that Monkeypox is spreading.

Before anyone could say Monkeypox jjab patent, the U.S. government swooped in to purchase over $100 million in jjabs to treat both Monkeypox and Smallpox.

In February 2021, patent application #20210260182 was filed for RECOMBINANT POXVIRUS BASED VACCINE AGAINST SARS-CoV-2 VIRUS. This is a combination pox/COVID jjab patent filed over a year ago:

In some embodiments, the SARS-CoV-2 protein is inserted into the Thymidine Kinase (TK) locus (Gene ID HPXV095; positions 992077-92610; SEQ ID NO: 1) of the horsepox virus or the synthetic horsepox virus.

Then came the newly patented pox-combo Omicron jjab. Of course, other labs are developing tests for Monkeypox virus. Get read for the temperature checks. You know the routine.

The official story from the CDC is that “Monkeypox” was discovered in 1958 “when two outbreaks of a pox-like disease occurred in colonies of monkeys kept for research” … and injected with Smallpox.

Not too long ago, in 2018, the Horsepox virus had its heyday when researchers told the story of the”infectious virus” synthesized in a lab. Symptoms may include a desire to neigh, snort, and gallop with the herd. But seriously…  Horsepox was said to be the cousin of the Smallpox virus, which health authorities claimed had been eradicated from the planet in 1980. Why eradicate one “deadly” virus only to revive its cousin? What is the purpose of Franken-science?

The official answer was “to develop cancer treatments and jjabs,” especially since the current Smallpox jjab (Variola) has some serious adverse side effects, including death. Note: nothing is ever said about curing cancer, only about “developing treatments and jjabs.” From the 2018 paper, Synthetic viruses — Anything new?:

…it comes as no surprise that it is possible to generate infectious viruses by using synthesized DNA fragments. The first synthetic virus, poliovirus, was produced by Wimmer and colleagues and made us aware of the fact that we entered a new era of reverse genetics that allows for the generation of synthetic viruses without the need for a nucleic acid template.

Many scientific papers published since 2018 have questioned the wisdom of engineering viruses from deadly Smallpox, which they admit could lead to the reemergence of Smallpox, as well as to future pandemics. What if the lab-created monkey virus or the horse virus escaped into the wild? What then?

Previously, scientists had blamed monkeys, as well as other species, for the consequences of their genetic experiments: in monkeys (SV40); in pigs (Swine flu (H1N1)); in birds (Avian flu (H5N1) different from Chickenpox; and in insects (Zika mosquito borne virus).

Note: the same molecular signature, protein (PB1-F2), is present in both the 1918 Spanish flu virus and in the highly lethal h5N1 chicken viruses. Coincidence?

These synthesized varieties were not selected to become “epidemics,” only beta tests on behavioral dynamics; except for the Swine Flu Epidemic, which resulted in a mass jjab campaign, and was subsequently repealed after widespread jjab injuries and deaths [See my 2018 blog Beware the Horsepox Vaccine!].

With many stories in the media, it is important to know that there is something called The Species Barrier. Even in the Age of Ignorance, the Species Barrier still exists, and The UK Dictionary defines it as:

The natural mechanisms that prevent a virus or disease from spreading from one species to another.

In short, people cannot “catch” diseases from animals, birds, reptiles, insects, vegetables, or minerals. But, as long as people have short attention spans, and continue to be misled by the story, animals will continue to be wrongly blamed and punished for human-engineered, chimeric experiments.

The ultimate purpose of any “viral threat” is to roll out the “jjab solution.” And what exactly is the reason to push an agenda of jjabs? To engineer consent to reengineer humanity for deeper control: Monkey see-Monkey do. Therefore, any true global “viral threat” is not complete without a patented, engineered, controllable, injectable chimeric virus, coming soon to a city near you.

Back to the monkeys!

The media generates associations by first showing computer-generated images of microscopic cells that appear to be bacteria (not viruses). Then, they release images of raised blisters or a rash labelled as “Monkeypox.” Looking closer, any image labelled “Monkeypox” could double as  an image labelled Shingles.

Because the world complied so quickly to the illegal Coronavirus countermeasures, brought on by governments around the world, there is no need to wait years for the next epidemic! The “flying monkeys” are here to do the bidding of their creators.

Will Monkeypox parties be next?

What the WHO and CDC have not disclosed is that jjab ingredients are widely known to cause rashes, often a full body rash. A jjab-associated rash is a consequence of an influx of toxins to the body that results in a suppressed immune system. Frequent Strep Throat infections are another indication of a suppressed immune system. A.S.I.A is not a continent when it comes to jjab damage. A.S.I.A is Autoimmune/Inflammatory Syndrome Induced by Adjuvants, (ie, induced by toxins), where adjuvants are jjab ingredients (eg. aluminum sulphate). Keep this in mind. Do your own research.

Prior to the COVID injections, a rash was not indicated as a symptom of “Coronavirus,” which is a family of cold/flu viruses. According to officials, Coronaviruses can produce runny nose, sore throat, headache, fever, cough, and a general feeling of being unwell. True viruses, those not engineered in a lab, cannot survive outside the cell, they cannot transmit an infection because they are not alive (like bacteria). In this way, viruses are exosomes, produced by the cell in response to a toxic exposure, to help to clean the cell to regain balance and health.

Exosome biogenesis is a mechanism of protein quality control, and once released, exosomes have activities as diverse as remodeling the extracellular matrix and transmitting signals and molecules to other cells. This pathway of intercellular vesicle traffic plays important roles in many aspects of human health and disease, including development, immunity, tissue homeostasis, cancer, and neurodegenerative diseases.

Search “Exosome” on Pubmed and find more than 23,000 results. If we search results for “rash” from COVID injections more than a hundred studies are revealed. Search and find the same trend for Measles Vaccine-Associated Rash Illness, MMR Vaccine-Associated Rash Illness, and Shingrix for Herpes Vaccine. Just know that Shingles can result from the Shingles jjab, just like COVID can result after the COVID jjab, just like Measles rash and Mumps can result from the MMR jjab.

With so many contradictions in the story, did someone forget to edit?

The World Health Organization (WHO) claims the Monkeypox “outbreak” is containable, while the CDC urges new recommendations based on only “3 possible cases” of rash in the U.S. Other countries are reporting their own rashes. Today, 19 countries are tracking and reporting Monkeypox numbers; similar to the Coronavirus protocol. Some countries are already urging people to self-isolate.

Is Monkeypox a runaway train before it got started?

While the virus itself is not a sexually transmitted infection, which are generally spread through semen and vaginal fluids, the most recent surge in cases appears to have been spread among men who have sex with other men, WHO officials said, emphasizing that anyone can contract monkeypox.

Is that science or science fiction? Are we back to HIV-AIDS? Did we ever leave it?

Was the HIV virus “discovered” in 1984 by Dr. Robert Gallo so he could develop a jjab decades later when the world would be more receptive to injections?

Recall, in the 1980s, after the 1976 Swine flu Fiasco, jjab hesitancy would have stopped people from accepting mass experimental jjab campaigns. Without jjab hesitancy, bring on the HIV injections that can be taken two months apart!

Any injection, jjab or experimental, should be documented as safe before use. However, since 1986, jjab makers have been off the hook for damages from their products. If jjab makers do not stand behind their products why should anyone else?

Another contradiction: Neither HIV or Coronavirus has ever been isolated or proven to exist as a pathogen. However, according to the 2003 British Medical Journal, fragments of DNA identical to that of ‘HIV’ are found in all human beings. For more backstory on HIV-AIDS story, read the 2014 article, Questioning the HIV-AIDS Hypothesis: 30 years of dissent.

With so many stories still unfinished, has Monkeypox arrived on the scene as a hoax? A test of humanity? Another virus that divides and discriminates against bisexual and gay men? What about the devastation of 500,000 deaths caused by the prescription Opioid Epidemic from 1999 to 2019 that continue? What about more than 150 people who die each year from taking the OTC, FDA-approved drug Tylenol?

Nature has always ruled and Nature will continue to rule, but only if Nature’s Law is followed. Nature does not discriminate on the basis of race, religion, politics, education, jjab status, or sex. Only patented lab-created viruses do.

Just because the media stories report on a Monkeypox viral threat, does not mean that humans need fear monkeys or eradicate them, like they did when they agreed to put chickens into lockdown from Pennsylvania to France then exterminated them out of fear.

Fear is False Evidence Appearing Real. Fear freezes people’s ability to be reasonable and rational. Fear separates and isolates. Fear masks identity. Fear disconnects humans from Nature, from each other, and from themselves. Going forward, if choosing fear, refrain from making any decisions or they will be made for you.

Perhaps humans should fear only humans with a god-complex, those who would unleash a lab-created/patented monkeypox/ Smallpox/ Horsepox/ SARS-CoV2 virus into the population via injection for the purpose of reverse genetics.

Forget the Horsepox and Monkeypox stories. Could humanity be looking at a re-deployment of the original Smallpox?

About the author: Rosanne Lindsay is a Traditional Naturopath, Herbalist, Writer, and Author of the books The Nature of Healing, Heal the Body, Heal the Planet and Free Your Voice, Heal Your Thyroid, Reverse Thyroid Disease Naturally.